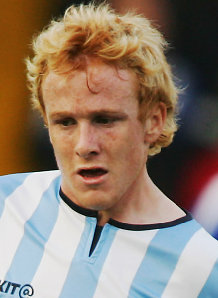 Midfielder Kevin Thornton has joined the Cobblers on a short term deal after impressing on trial following the recommendation of Nuneaton boss Kevin Wilkin. Wilkin was helping Thornton return to fitness and suggested him to Ian Sampson who was impressed and has now signed him.

The 23-year-old came through the ranks at Coventry City and made sixteen appearances in the Championship in 2005 before joining Brighton on loan in 2008. Thornton left the Sky Blues by mutual consent in the summer and after a brief spell in his native Ireland with Boyne Rovers FC he joined Nuneaton Town on a non contract basis.

The Cobblers have now brought him back into the league and he’ll be looking to make his mark to earn a longer deal at Sixfields.