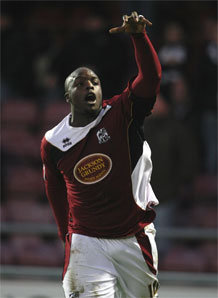 In a quickly re-arranged fixture, Chesterfield are now the visitors on Saturday afternoon as the Cobblers look to jump into the top half of the table. The stage couldn’t be set much better with the new opponents just six points ahead of Town in seventh place, meaning a win could, incredibly, bring us to within touching distance off the playoffs.

Before we can even think about that though we need to muster the kind of form that’s seen us collect ten points from four games with four clean sheets, a run that’s taken Ian Sampson’s team away from danger. Sammo has a relatively fully fit squad to choose from and the form of Ryan Gilligan, Adebayo Akinfenwa and Luke Guttridge along with the solid defence has us in good shape.

Chesterfield hope to have Rob Page back from a hamstring injury and Frankie Artus is available after joining the Spireites on loan from Bristol City. After some indifferent form, the visitors picked up a 1-0 home win over Torquay United last weekend to cement their place in the top seven and will be hoping to push on at Sixfields.

With football well and truly back following the icy weather, here’s hoping for three more points in the first home game of the calender year!