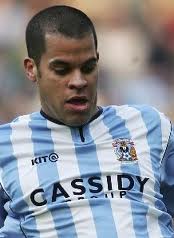 Marcus Hall has finalised his move to Sixfields by signing a one year contract with the club. Hall was drafted in after Peter Gilbert left the club a few weeks back and looks like a perfect fit for the left back position.

At 34, Hall has bags of experience and boasts an impressive C.V. of a career in the top two divisions of English football. Making his Coventry début in 1994, he went on to become one of the Sky Blues most consistent performers and stayed until 2002 when Nottingham Forest took him to the City Ground on a free transfer. After playing just once for Forest though, Hall signed for Southampton although never got even one game for the Saints. Stoke City handed him a way back and Hall would go on to make over eighty appearances for them before rejoining Coventry for five more years in 2005.

It’s another big signing for Sammo ahead of this afternoon’s friendly with Birmingham City at Sixfields and expect to see as close a line-up to Sammo’s first choice take to the field with it being the final friendly before the season kicks off next weekend.