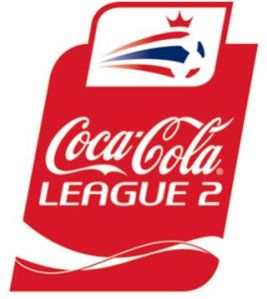 The Cobblers had as good a night as possible without playing last night with relegation rivals falling to defeats that keep us seven points clear of the drop zone. Barnet have now played an extra game to Town and they were beaten 1-0 at Aldershot last night. The Shots won it with a goal from Danny Hylton on the hour mark to leave Barnet in all kinds of trouble.

They will have gained a little glimmer of hope from the fact that Burton continue to stall in their bid to escaped their clutches as the Brewers went down to a 2-0 home defeat to Stevenage in a result that lifted Borough into the playoff places. John Mousinho struck twice at the Pirelli Stadium to sink Albion and leave them just a place above the relegation zone. Despite their four games in hand it’s always going to be a lingering worry until they get a couple of wins from those games and that will be the hope from the boys from Underhill.

Meanwhile, Hereford could only go level on points with the Cobblers but picked up a useful draw at Port Vale. The Bulls looked to be on their way to all three points when James McQuilkin gave them the lead but Tom Pope’s header three minutes into stoppage time put pay to that.

Macclesfield saw off ten man Morecambe to keep up their good recent form and move 12 points clear of Barnet. Hamza Bencherif’s ninth of the season opened the scoring before Tyrone Bennett made it two. James Spencer halved the deficit but the home side ended with ten men after Stewart Drummond picked up a second yellow card.

It’s all change in the playoff race as Torquay rose to fourth place with a 2-1 home win over Cheltenham. Guy Branston scored for the second time in two days in the first half and Ronan Murray doubled the advantage. The Gulls survived a late rally from Cheltenham that saw Danny Andrew score from a free kick but they held on to go to within three points of Wycombe in third place. Indeed they will go into the top three should they win at Sixfields on Friday night.

There was controversy at Crewe as Accrington were denied a victory when Sean McConville’s shot appeared to bounce off the bar and over the line but nothing was given and the game ended goalless, a result that halts both side’s playoff ambitions.