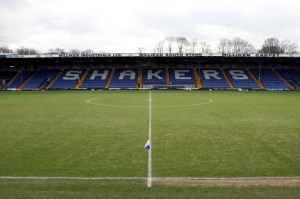 And so the battle for survival goes on and either way there’s going to be significant movement this evening. Burton go to the Cobblers’ weekend conquerors Bury knowing that a defeat by more than two goals would mean that they drop into the bottom two below Barnet with just one of their games in hand left to play.

Psychologically that could be the Brewer’s downfall because after going for so long using their games in hand as a back up that’s meant on paper they shouldn’t be in trouble, they would be staring relegation in the face for real for the first time.

Back on February 1st, Albion were in the same league position and had just had their excellent FA cup run ended by Championship side Burnley. After defeat to Shrewsbury, in what was a rare league game at that stage, left them on 25 points alarm bells were still far from ringing. For after a winter of sparse games in League Two, it was assumed that they would make use of six games in hand to ease themselves out of the troublesome position they found themselves in. Since then, though, the extra games along with the normal league games played yielded just sixteen points from seventeen games, all crammed into hectic Saturday-Tuesday-Saturday schedules.

The final game in hand comes next week away at Bradford and sandwiched in between is a home clash with Cheltenham so it’s a massive seven days in which the Cobblers and Barnet will only play once.

Bury’s promotion bid continues though and they can go second tonight if they pick up all three points. Even a draw would take them there but victory might yet have Chesterfield looking over their shoulders at a seven point gap rather than ten as it currently stands. The two sides also meet at the B2Net Stadium on Easter Monday.

Ryan Lowe and Nicky Ajose caused havoc at Sixfields on Saturday and we’ll be hoping for more of the same tonight (well it’s only fair!) from a strike partnership that’s produced 37 goals this season. One man who won’t be there is Chris Holroyd who was recalled from his loan spell by parent club Brighton this week.

Not that the strikers seem to need any help but Robbie Fowler has joined the club for a week to work with the prolific attack and hopefully will have a big effect as the Shakers battle the other two prime candidates sitting between the Cobblers and relegation. Richie Barker has won both games handsomely since he took caretaker charge and scored seven goal in the process so Burton could be in for a rough ride having won just twice on the road all season, one of those at Sixfields of course!

Bury are less prolific, in terms of points gained, at home but you still wouldn’t choose it as the first place to go when in desperate need of something as Burton are tonight. Cobblers fans are set to be Shakers for the night as another chapter is written in this intriguing survival battle.