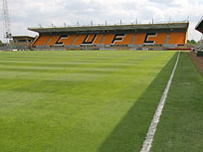 And so to the final away friendly of the summer with tonight’s trip to Cambridge United giving us, supposedly at least, a better opponent of the calibre of League Two. Those of us who have sorely missed the Abbey Stadium and all its quirks including the jaunt across the cow fields to get into the ground will have to shell out £12 to get in tonight as Gary Johnson sets up a team that’s close to what he wants on August 6th.

The two exceptions could be the two foreign players that are being talked about in very high regard over the last week or two. 17-year-old Austrian Marin Pozgain played in the closing stages of Saturday’s defeat to Reading and looks set to get one final chance at impressing. Another youngster from abroad, an 18-year-old unnamed striker may also get a run out but apart from those two we expect to see a full strength Town line-up and not many changes during the game.

The hosts will be aiming for a promotion challenge this season with Jez George having been handed the managerial role on a permanent basis back at the start of May. Hoping to fire them to glory will be ex Cobbler Daryl Clare and new signing Ryan Charles who played for Rushden and Diamonds last season, scoring seven times.

It’s a chance to kick on with plans and it’s all well and good saying how performances are vital but it would be nice to end this evening with a victory for the doom mongers’ sakes at least. That would set up the final home friendly, against newly promoted Wycombe Wanderers on Saturday, nicely as time draws ever closer to the big kick off.