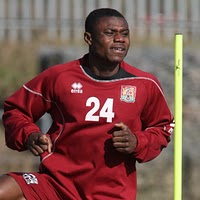 Gary Johnson could be about to dip into the loan market as defender Nana was ruled out for the remainder of the season after scans revealed a raptured cruciate knee ligament injury was picked up in the 3-0 win over AFC Wimbledon last week. After only joining the club on a permanent deal in the summer it’s a huge blow for the former Peterborough man and Cobblers boss Johnson will now look into replacements.

Andy Holt is set to return to training soon but Johnson is still without Byron Webster and could be looking for a loan deal this week to sure up the back line.

One name that has been banded about is former Town defender Jason Crowe with Johnson mentioning that one of the players he’s looking at has been out of contract since May and with Crowe a seemingly natural replacement for the injured Nana. That’s only rumours though and we’re back in the position we were in during the summer when all sorts of names were being thrown around the terraces during friendly games.

With David Cardoza giving Johnson the ‘dreaded’ vote of confidence over the last day or so it’s clear that he wants to back the boss on and off the pitch. That could, in turn, lead to at least one new face at Sixfields come the Dagenham game this Saturday.