With points at a premium, early 2012 form a distant memory and the Cobblers bottom of the Football League there’s not many places in the league that would be worse to visit than Plainmoor, a ground at which have failed to win in the league since clinching promotion in 2000. All the spirit of that day will be required and perhaps some more if we are to climb out of the bottom two ahead of the team beaten there on Tuesday night, Dagenham and Redbridge, and Torquay’s rivals Plymouth Argyle come 5pm.

Torquay climbed back into the playoff places last weekend thanks to a 2-1 win at Morecambe with Mark Ellis and Danny Stephens on the score sheet and solidified that place on Tuesday with victory over Dagenham at Plainmoor. That win took the Gulls to within five points of the top three and they’ll be looking to continue the momentum that’s seen them win five of their last six games.

The Cobblers sit bottom of the league once again after a 2-1 home defeat to Barnet last Saturday. Having kicked off 2012 with four points from trips to Shrewsbury and Morecambe we once again failed to capitalise back at home and a 5-2 hammering by Southend followed by that loss to the Bees have got the nerves kicking off once again.

Joe Oastler should be fit for the game despite limping off on Tuesday night with a dead leg. (more to follow)

‘New’ signing Luke Guttridge goes straight into the Cobblers squad for the trip to Devon but Jake Robinson is battling for fitness in order to face the club he helped lead to the playoffs last season. Meanwhile, Chris Weale made his debut last weekend and should keep his place in goal. 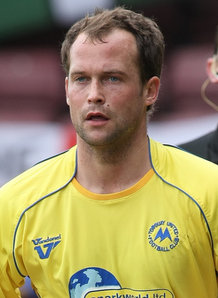 Kevin Nicholson was with the Cobblers for a short period in 2001 but only made seven appearances for the club before signing for Notts County.

Luke Guttridge started his career at Torquay but made only one appearance for the Gulls after receiving a better offer from Cambridge United.

Jake Robinson spent a successful spell on loan at Torquay in the 2010-11 season, scoring seven times to help the Gulls to the Playoff Final.

Bayo Akinfenwa spent one season at Plainmoor after signing in 2004 as a replacement for outgoing striker David Graham. Bayo netted fourteen times before moving on to Swansea City.

In a manic finale to this crucial game towards the end of last season, Eunan O’Kane gives Torquay the lead early on before John Johnson levels. Billy Kee nets a 90th minute goal to seemingly give the Gulls all three points but incredibly Guillam Bauza equalises again in stoppage time!

An opening day of the season encounter at Plainmoor ends with Torquay making the perfect start to the campaign after a 3-0 hammering that saw Kevin Nicholson open the scoring against his former club and Chris Zebroski and Elliot Benyon make it safe early in the second half.

Another goalless draw at Sixfields on a Bank Holiday Monday near the end of the 2009/10 season.

Chris Hargreaves scores an 83rd minute winner to sink his former club in a tight contest back in October 2009.

The Cobblers jump into the top three of League Two thanks to an Ian Taylor goal with ten minutes to go. Town would go on to clinch promotion a few months later.

The man in charge of this one is James Linington who last took charge of Town in the 4-2 home defeat to Bury last April.

It’s getting harder and harder to let the heart rule the head with these predictions but let’s just go for a point. I’ll go for a 2-2 draw!