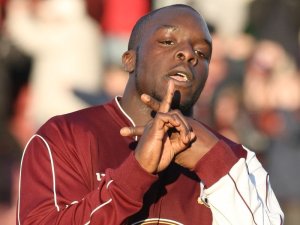 The 2011/12 season kicked off with the usual sense of optimism heightened by the fact that Gary Johnson had put together what, on paper, looked like a decent squad over the summer. The return of Bayo Akinfenwa along with the other attack minded ‘marquee’ signings of Jake Robinson and Arron Davies gave Sixfields an upbeat and anticipation-filled atmosphere as we prepared for the opening game of the season against Accrington Stanley.

There were other new additions making their debut as well with Ashley Corker, Paul Turnbull, Ashley Westwood and Bas Savage all featuring. But things didn’t quite go to script and it would be a frustrating afternoon as Stanley held out for a goalless draw. A quick turn and shot from Robinson that was cleared off the line was the closest that the Cobblers would come as we had to settle for opening our account with a single point.

Better was to come a few days later though as the love affair with the Carling Cup carried over from last season’s fine run into the Fourth Round. On that occasion it was Ipswich Town that finally brought the run to an end but when we were paired together again for the First Round this season it was Town who came out on top at Portman Road. The victory was made more impressive by the fact that we had to come from behind following Jay Emmanuel-Thomas’ early goal as Ben Tozer levelled and Paul Turnbull turned the game around and saw us through to a Second Round meeting with Wolves at Sixfields.

Back to the league and the momentum from that cup win carried over to the trip to Aldershot with Ashley Westwood heading in inside the opening minute of the game to crown a great start to his own return to the club. A late flurry ensued but we held out for a first three points of the season, making it a decent first week of the campaign.

The first defeat would soon follow though as Bristol Rovers edged the Cobblers out at the Memorial Stadium. Jo Kuffour would begin a season of terrorising the Cobblers by opening the scoring and, after Bayo Akinfenwa had scored his first goal since returning to town in the summer, Matt Harrold stabbed in the winner with fifteen minutes to go.

The early optimism was soon washed away after Cheltenham Town came out from a five goal thriller at Sixfields victorious that Saturday. Darryl Duffy scored, after a controversial decision, from the spot but Arron Davies equalised before the break. Bayo headed in a Lewis Young cross to put us in front but it was the Rubies who would find that extra gear and Duffy got on the end of a cross from former Cobbler Josh Low for 2-2 before Low himself slotted in from just inside the area to seal all three points for his side.

The heroics in the Carling Cup then came to an end with Wolves demolishing the Cobblers 4-0 with Sylvain Ebanks-Blake netting twice either side of a Nenad Milijas strike and Sam Vokes rounding things off with two minutes to go.

The downward turn in fortunes would continue with a third league defeat in a row coming at home to Morecambe thanks to a first half double from Phil Jevons and Laurence Wilson, with Wilson netting from the spot, to earn the Shrimps a fourth league win in a row.

Another cup defeat was the final action on the pitch of the opening month with Huddersfield winning 2-1 at Sixfields in the First Round of the Johnstone’s Paint Trophy but it would be off the pitch actions that would provide the biggest talking points.

Shaun Harrad hadn’t played for the club so far after a summer injury kept him out of the early part of the action. Rumours then started to circulate that it was actually Gary Johnson keeping him out of the squad for the past couple of weeks out of choice and that Harrad – last season’s top scorer – would soon be sold. Those rumours came to fruition on a deadline day to forget for the Cobblers. Harrad was sold to League One Bury and made his debut against Sheffield United a few days later.

With a need for goals and spark up front, it was a ludicrous move and started what would become a long and drawn out end for Gary Johnson as he would further distance himself from the supporters during the next two months…

Highlight of the Month: Victory at Ipswich Town in the Carling Cup

Player of the Month: The returning Bayo Akinfenwa