In the next part of this playoff special we take a look at the prospects of one of, if not the surprise package of League Two this season, Cheltenham Town. Mark Yates has transformed the Rubies from relegation candidates last season, a campaign in which they finished just five points above the drop zone, to promotion contenders for the majority of this season.

2011/12 has already seen plenty to shout about for Yates’ men as they recovered from a disappointing first couple of games to discover form and defeat both Swindon and Crawley at Whaddon Road. A mixed September meant that not even the most hardened Town supporter could envisage what would come in October as their club won five out of six games in the league as well as seeing off League One Wycombe in the Johnstone’s Paint Trophy. Yates was perhaps cruelly beaten by Crawley’s Steve Evans to the Manager of the Month award that month but a foundation had been built and Cheltenham were on their way.

Winning all three league games in November, the Rubies also progressed through the First Round of the FA Cup, beating another League One club away as Darryl Duffy’s penalty saw them through at Tranmere. Yates finally got his recognition with the Manager of the Month for November and not only did his side continue their fine run by going through December unbeaten but they also set up a Third Round FA Cup tie with Tottenham Hotspur by winning 4-2 at Luton Town.

A 3-0 defeat at White Hart Lane was no disgrace and the fact that it was sandwiched between back to back league wins made it that bit more bearable as Town rode on towards the summit of League Two. A slight February wobble was hammered away by a 5-0 victory at Dagenham and it all looked set for an almighty finish to the season. 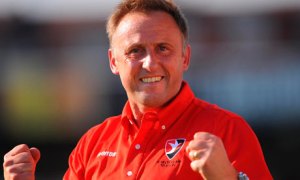 The club were hanging around the top three until mid-March when four successive defeats pulled them back from the automatic promotion shake up into the playoff race and it’s perhaps a testament to the work of Yates and his squad that they were still in a strong enough position to keep hold of a place in the running for the top seven.

That place was confirmed thanks to three straight home victories in April and many people’s underdogs will now take their rightful place in the end of season lottery in a two legged-affair with Torquay United.

Max Hobbs (@maxihobbs), our resident Cheltenham fanatic and creator of this Rubies’ blog, gives his thoughts below on what could be a stunning end to a surprising season…

Did you expect to be in a playoff position when you started this season?

Not at all and I think the same could be said for Torquay in reality too. A look at Coral on the day before the season began put us 11/4 favourites to go down, in that sense alone our season has been remarkable especially considering we topped the League as late as February. Sadly March killed off our automatic hopes but I prefer the thrill of the play offs anyway!!

What have been the key moments in achieving a playoff spot?

Our start to the season, as usual, was fantastic and we were right in the mix after some great performances mainly on the road. People expected us to fade which ultimately we did but I think we’ve shown great character to now finish 7 points into the play offs. Between September and December was where teams really stepped up and took notice of us.

Who have been the key men?

It’s a cliché but the whole squad have been imperative in our rise this season. We have a small squad so they’ve all played their parts but inevitably you have stand out players and it’s hard to look past the quality of Marlon Pack, the sheer determination of Russ Penn and Sido Jombati at the back has been a revelation. I could name plenty more including the 2 CB’s, Luke Summerfield and Kaid Mohamed – as a unit we’ve been fantastic and the togetherness of the squads of 02 and 06 which saw us win the playoffs is there.

Which team would you want to avoid in the final should you make it?

Without being disrespectful I’m happy to have drawn Torquay and I think they’d probably believe likewise. Crewe’s unbeaten run is becoming longer by the week and we recently came off the back of a 4-0 hammering at Southend so I didn’t fancy either of those and whoever we get in the final will be very difficult. Crewe have already done the double over us and have forgotten what it’s like to lose and with the quality of Nick Powell and Luke Murphy I’d probably rather take on Southend, just!

Finally, will you be promoted?!

Our playoff record is as good as it gets and we always seem to pull something out the bag for occasions like this but I’m not so sure. I think whoever goes up will be deserving of their spot and I also feel all 4 teams could hold their own in League 1. There’s no reason why we can’t but I’ve got a feeling for Crewe.