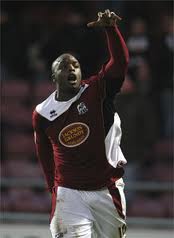 It was a tale of continuing patterns on Tuesday night as the Cobblers once again won on a Tuesday night under the stewardship of Aidy Boothroyd and Town also recorded a third straight 1-0 win at the home of the Daggers.

Since joining the club in December of last year, Boothroyd’s run of Tuesday night victories makes for fun reading: AFC Wimbledon, Macclesfield Town, Bristol Rovers, Dagenham, Burton Albion, Cardiff City, Rotherham United, MK Dons and now the Daggers once more have all been beaten by Town on Tuesdays with only Crawley Town managing to win a fixture that fell on that particular day of the week. That’s nine wins and one defeat from ten Tuesday night games with this latest addition most welcome following the weekend loss at Fleetwood Town.

As mentioned, it was the third 1-0 win in a row at Victoria Road and coupled with home wins over John Still’s men in recent seasons it’s now five out of five in all fixtures.

This one felt deserved and included all of the usual ingredients of a Tuesday night League Two fixture: a dip in weather, scrappy football, some terrific work on the terraces from a hearty bunch of travelling fans and a single, simple goal from a set piece.

It was to be my first away game of the season and, as seems usual for myself and The Honorary Cobbler Jamie, we  found ourselves legging it/pegging it from tube to tube to try and get to the geographically difficult Victoria Road. After nearly running into the home terrace we got there with about twenty second gone. Not bad considering a past venture has seen us miss the entire first half an hour at Yeovil.

The game was bitty with the Daggers having the best of the opening twenty five minutes or so but as the half grew on Town got more and more into the swing of things and, with Bayo Akinfenwa leading the line well after shaking off illness, created chances of our own. The big man really should have scored after bringing the ball down in the area and seemingly having the entire net to shoot at before poking it wide just before the break.

It felt like a set piece would be the thing to win it and after the Cobblers came out of the blocks well in the second half, those feelings were proved right. Akinfenwa rose to meet a Chris Hackett corner to nod in the only goal of the game as Town produced a good display to ensure there were no late jitters.

There was one moment of panic when Josh Scott forced Lee Nicholls into a fine save with about fifteen minutes to go – the keeper at full stretch to push the ball wide.

There was no real siege though as the Cobblers, refreshingly, played out the final few minutes at the right end of the pitch with a couple of well won corners and holding play. The substitutes Clive Platt and Henoc Mukendi both did a stellar job of keeping the play in the Daggers’ half and giving Cobblers fans a rare chance to witness a relatively painless period of stoppage time.

I also have to mention some top drawer skills from Bayo in the second half as, twice in a matter of minutes, the big man bamboozled the home defence with flicks and tricks to utter joy from the Cobblers’ contingent! Apart from his awesome return to the side, there were good performances from Luke Guttridge, Kelvin Langmead and Ishmel Demontagnac with the latter getting a rare chance to start and taking it with both hands.

This won’t go down at the end of the season as an amazing win or one that many will remember but what it does mean is three big points and a big stepping stone in our steady progress this term. It was the type of night similar to that of a 1-0 win over Boston United in 2006 that underpins a lot of the more flashy victories during a successful season and the kind that is essential to any team that has ever won promotion.

We’ve got a long way to go before we can even start thinking about anything other than mid-table security but this night was another great change of pace from the struggles of months gone by.