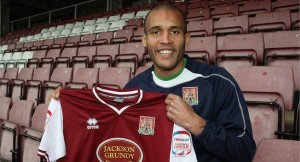 In a quick fire, unexpected move this afternoon, Clarke Carlisle returned to Sixfields from York City. In what will be a permanent deal come January, Carlisle signs for his second stint having helped to steer us to safety last season. Carlisle delayed his decision in the summer, we all wished him luck and off he went up north but now he’s back – handily with a few months of match fitness behind him – and straight into the squad for tomorrow’s game with Morecambe.

It’s a great piece of business in my eyes. Carlisle clearly still has the drive to make things work and we know all about his quality from the back end of last season. With so many young kids coming through and playing at the moment it’s good timing that an experience head like Carlisle can come in to help their development and hopefully be involved in another successful spell – this time at the right end of the table I hope!

Since he’s been gone, the squad has been taken apart and put together again through one means or another but you can definitely see him slotting straight back into things. Come January and the return of David Artell there’s likely to be plenty of competition but two things must remain.

Kelvin Langmead has gone from strength to strength since being handed the captain’s armband and I think he needs to keep it. Taking it from him and putting it back on Carlisle may a step that’s being considered but I don’t think any of us were prepared for the Langmead that’s started this season. He’s stronger, faster and so much more focused that taking the captaincy off him might take some of that away. I’m not sure if that’s even in the plans but I feel that Carlisle doesn’t need it whereas Langmead is flourishing.

The other thing is that Ben Tozer needs to remain a defender. I’ve still not completely spotted completely what he brings to midfield and with Ben Harding and Chris Hackett returning and Lewis Hornby going great guns I wouldn’t like to see any of them taken out of a starting eleven.

What we do have is another top quality and proven player on our books to provide some healthy competition for these long winter weeks where games come thick and fast (the annual League Two snow-athon aside) so I can’t think off too much that’s wrong with this piece of transfer business.

Carlisle gets a quick chance to reacquaint himself with Town fans tomorrow evening and should at least be in the squad. A preview of that game should be up here by the morning.