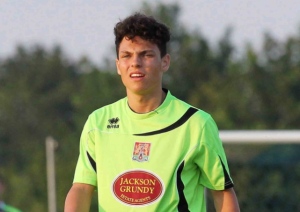 So it’s not really ‘proper’ transfer window news but the moves are waves of change are beginning as January enters its second half. Anthony Charles has been released from his contract having been told by Aidy Boothroyd that he will find first team opportunities limited and that he would have been released in the summer. Meanwhile, Lewis Hornby has signed a two and a half year deal that could turn out to be a very shrewd move indeed by the Cobblers boss.

I feel a bit for Charles who always seemed to be a reliable figure to be thrown in should another defender go onto the injured list. He could fill in at left-back or centre back and didn’t do an awful lot wrong from what I saw. The release, a year after he signed with Town, does lead me to believe that something else is happening behind the scenes in terms of someone else coming in. David Artell is coming back into the fold but I would say that we need some cover from a left sided defender in case Joe Widdowson succumbs to injury or suspension. Charles seemed to fit that category but maybe Boothroyd is playing the dangerous game of gambling on Widdowson’s fitness and using someone like Ben Tozer as that back up.

Hornby has been one of the bright lights of this season, coming from nowhere to solidify his place in the side. He can legitimately push people like Luke Guttridge and Ben Harding, relatively experienced heads in the middle of the park, for a starting place. It’s all happened as quickly for Hornby as it did for Michael Jacobs a couple of years ago and it’s a great piece of business to tie him down to a longer deal. It’s also another plus for the academy who have guided a crop of youngsters into the public eyes over the last few months. Dean Snedker was called up to the England Under 19s this week in a huge piece of recognition and Hornby’s first professional deal makes it a top week for those working with the youth of Northampton Town.

As one experienced head moves out and one fresh faced youngsters settles in to his first professional deal we wait to see whether this was just a shift of wages or whether there’s more news to come from what has been a quiet window for the Cobblers so far.