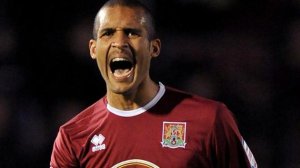 It needed a double take at the League Two table on Tuesday night but there it was in clear print – the Cobblers were sitting in third place! Exactly one year ago we were rock bottom of the entire Football League but, for a few days at least, Northampton Town are behind just two other clubs in the standings – one of whom we face in a week’s time.

With some heavy snow falling on Tuesday afternoon it was a minor miracle that the game went ahead but with the Shots desperate to play to cover the final game of Danny Hylton’s suspension ahead of their FA Cup tie with Middlesbrough on Saturday (Hylton even helped to clear the pitch of snow) there was always going to be a strong chance of that happening.

Our own talisman would also sit this one out as speculation escalated regarding the future of Bayo Akinfenwa after he was reduced to a place on the bench. Aidy Boothroyd said that he wants to ‘protect’ Akinfenwa and the optimists amongst Cobblers fans will suggest that it was just a rest for the big man. Perhaps, though, Boothroyd needed to know that we can perform and play without Bayo. Either way, as the Town team bus crawled back home on Tuesday evening there would have been nothing but smiles emanating from players and staff alike as they clicked their respective phones onto the various ‘League Two table’ pages online.

It had been a testing evening in some tricky conditions but the manner of the win, coming from behind away from home was a huge boost. I said just a couple of days ago that we desperately need to sort out the away form in order to keep hold of a place in the top seven and this would have been a big psychological evening for the players who had been in a bit of a rut away from home, winning just once in the previous eight trips.

This was to be the one that brought relief to the hardy 140 souls that made the trip down to Hampshire. It was looking like another long night may be in the offering when Aldershot took the lead within two minutes thanks to Dani Lopez’s close range effort but the Cobblers settled down after that to forge a comeback before half time. First, Michael Hector handballed and Chris Hackett levelled from the penalty spot and then just over ten minutes later Clarke Carlisle notched his first goal since re-joining the Cobblers by heading in a good delivery from Hackett from a corner.

There was to be one hairy moment to come with Kelvin Langmead clearing off the line in the early exchanges of the second half but we also had chances to extend the lead through Hackett and Lewis Hornby, who had a shot of his own cleared at the last. The Cobblers were reasonably comfortable seeing the game out, though, and as the hosts try to recover in time for their big cup date on Saturday we can relax with a blank weekend having already bagged the points that we would have been playing for.

I don’t want to get anywhere near ahead of myself but holding on to these points could turn out to be one of the biggest moments of the season. Whilst propelling us into the top three is extremely pleasant on the eye, the lasting effects may yet serve as a late reminder to anyone who is considering their future that they may just be building something here that they can’t leave behind.