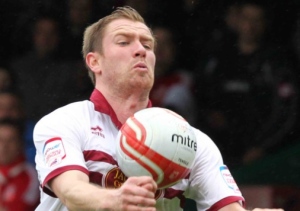 This type of Saturday-Tuesday-Saturday week is becoming a familiar feature of the second half of the season with plenty of games to be caught up with from winter postponements. And if the Cobblers are to be promoted in any way come the end of the season, this is exactly the type of double result that needs to be happening on a regular basis.

A home win followed by a point away from home may seem par for the course for a playoff chasing side but these points cannot in any way be underestimated as those chasing the playoffs close in and those at the top squeeze tightly into seven crucial league positions.

For me to be writing about an end of the season that could well end with at least a playoff spot is a pleasure in itself. With just eight games to go the excitement is starting to well and truly kick in. Suddenly we can see the finish line and if result continue like this then there’s no reason why we can’t be going into the final game of the season with genuine hope of an automatic promotion spot.

I’ve spoke before of the composure of home wins throughout what is now an eight game streak that stretched back to December and the renewed sense of belief and spirit away from home. At Exeter we had a real off day but that’s been pushed right to the back of the memory banks with two fine performances that could even have ended with a maximum points haul.

The home win against Accrington was set up in the first half, during which Chris Hackett welcomed himself back to action with a rocket of a free kick before former Cobblers loan keeper Paul Rachubka handed the second to Roy O’ Donovan on a plate, slamming the ball against him and losing the battle to reach it at the second attempt.

Stanley threatened more in the second half but it was comfortable enough for a Cobblers side who are getting the hang of doing just enough at Sixfields to keep up a sequence that could break some records should it carry on much longer. The current best home run ever for a Town side is 12 in a row between April and December 1927 and with four home games to go this season we could match that (or attempt to break it if we enter the playoffs!)

The latest home win set up a Tuesday trip to Morecambe nicely with the Shrimps coming into the game on the back of a 4-1 hammering at Barnet on Saturday. They were out to prove a point and after the Cobblers had hit the post three times in the first half it was almost inevitable that the irritatingly bitey Jack Redshaw put them in front with a fine finish following a lay off from Kevin Ellison.

It didn’t look like being our night until once again we had Captain Marvel to thank for hauling us back from the brink. In the 88th minute, Ishmel Demontagnac’s free kick smacked the post and the ball dropped low for Kelvin Langmead to nod into the empty net. It was nothing less than the Cobblers deserved and on another night we may well have been celebrating back to back victories.

But four points is another big step, particularly with teams around us keeping up the pressure with points of their own. Port Vale are dropping like flies and are now the team to catch in third thanks to Burton Albion’s own form that has taken them above the Valiants.

I think we can discount Gillingham who are keeping their heads when all around them drop out of the race with Martin Allen’s men five points clear at the top with a game in hand. Apart from that though it’s all up for grabs with Town three points from Burton and two from Port Vale. Perhaps what we should be looking at first, though, is those just outside the playoff places and with Southend suffering another defeat they’ve slipped away a bit, meaning that Fleetwood and Oxford are the main contenders going into this weekend.

There’s seven points between the Cobblers and eighth place at the moment and that’s what my main focus is at the moment. If we can seal a playoff place before the end of the season I would be delighted and anything more from then would be amazing.

Wycombe away on Saturday will give us another big test but you get the feeling that this Cobblers side is capable of keeping themselves rolling on. There will be setbacks like Exeter along the way I’m sure but as long as we bounce back like we have done in the last few days then promotion dreams will stay alive.