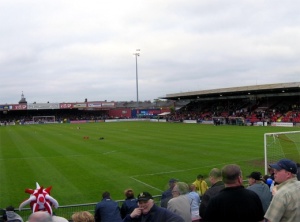 Hoards of offices and work places across the county came to a secret stand still this morning (those with unblocked internet that is!) as the 2012/13 fixtures were released. For the Cobblers, it’s an opening day trip to York City to contend with which is likely to be a tricky prospect given that the Minster Men greatly improved at the end of last season and handed the Cobblers their only home defeat of 2013 to date. Last season saw us draw 1-1 at Bootham Crescent despite going down to ten men.

Following that first game, Town will host MK Dons in the League Cup in the first home match of the new campaign before league returnees Newport County make their first ever visit to Sixfields for the first home league game. August closes out with a trip to Southend United, a home game against Torquay United and then a visit to Bristol Rovers.

Boxing Day was the next big one to look out for and that takes us to Burton Albion and the final game of 2013 is away at Portsmouth.

The return game with Pompey comes in the penultimate home fixture whilst the season ends with a trip to Dagenham and Redbridge and what could be a mouth-watering ‘derby’ at home to Oxford United.

It all brings that extra bit of excitement to the summer and we now move ahead with plans and buy the new gloves to prepare for those winter trips to the likes of Plymouth, Chesterfield and Hartlepool!