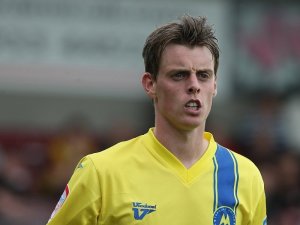 So I’ve apparently been a ‘reveller’ for the past few days as I escaped from most forms of communication by going to my second Glastonbury Festival. In the midst of an amazing time there was the odd check on the phone before it died to catch up with news from the Cobblers and it was, of course, the busiest period in weeks. Let’s have a catch up..

Ian Morris has arrived as Town’s second summer signing as he joins up from Torquay United. The left sided midfielder/forward was out of contract with the Gulls at the end of the season and was snapped up by Aidy Boothroyd towards the end of last week. Morris came through the ranks at Leeds United before joining Scunthorpe United in 2006. He spent five years at Glanford Park and also spent time on loan at Carlisle and Chesterfield before signing for Torquay in 2011, scoring three times in forty eight appearances. I don’t know an awful lot about him but my trusty Twitter Torquay buddy @stinadreama provided this insight:

“Morro is a likeable, hard working team player. Missed most of last season through injury. Deserves a chance.”

Sounds good to me but as usual we’ll have to wait and see before passing any judgement. The question now becomes whether Ishmel Demontagnac will be able to keep a place in the side or whether Morris will become the number one choice for the left wing.

More good news is that Roy O’ Donovan has signed a two year deal. I’m a big fan of the little Irishman and think that given a good, full season he could be one of the better strikers in this division. His performances towards the end of the season, Wembley aside perhaps, showed a player who fans are likely to get right behind. The worrying quote from Boothroyd, though, was that he and Clive Platt formed a good partnership towards the end of the season. Does this mean that this will be the first choice starting partnership up front? Or is there another big man set to compliment Roy’s battling style?

Leaving Sixfields are Luke Guttridge, Ben Harding and Nathan Cameron with the first two rejecting new deals and the latter’s offer being withdrawn. There always seemed to be something going on behind the scenes with Guttridge so it wasn’t really a surprise whilst Harding may not have been guaranteed first team football. The Cameron issue is an odd one but it’s disappointing that he won’t be returning after showing great form in his brief spell, particularly in the playoff semi-finals. Another centre back is probably now on the shopping list.

So that’s how we stand as the squad heads to Croatia for a training camp that seems oddly timed with the squad not completely structured and finalised. From the photo on the official website today, though, it appears some trialists have been included. Get those Google images at the ready as we guess their identities!

That’s the briefest of catch ups and I’ll be back with more as and when. I better have a shower first though!