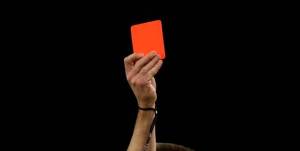 The underlying problem of the Cobblers’ season so far is becoming a bit of a farce. On Tuesday night, Ishmel Demontagnac got his long foreseen red card that meant for the fourth away game in a row we had a player sent off. Aidy Boothroyd was convinced that this was the only one of the run that was deserved (to say it was blatant is the understatement of the season so far) but that doesn’t take away any of the feeling that things have gone completely out of control on the red card front.

I don’t agree with Boothroyd’s statement in fact. Roy O’Donovan should have been more sensible at Bristol Rovers last week when launching himself in front of a throw in when already booked whilst Darren Carter and Chris Hackett should also have been more aware when already in the referee’s book when they got their marching orders at York and Southend respectively.

I agree that Demontagnac’s was much more straight forward and it’s been coming for a long time. We knew what we were signing when we got the former Blackpool man but there appears to have been no channelling of a hot temper into something more productive since his arrival last summer. There’s been flashes of quality but unfortunately those moments have been fewer that those that put us on edge whenever an opponent winds him up.

Boothroyd has come out and defended three of the red cards and also that he would be annoyed at his players for not going in for tackles. That’s all well and good but surely there needs to be some sort of line drawn. Very few successful sides are remembered for being rough tacklers with a reputation for a red card or moment of madness. What’s going to happen now is that other teams are going to focus on our dismal record of red cards and start winding us up even more from the get go. This needs to be drummed into the players ahead of games and those players (who have great experience between them) have to stand up and be counted and let their footballing abilities do the talking.

I’m not saying that we need to soften up – there’s a need for a passion and a hard challenge and we have to be tough in League Two. But what we can’t fall into the trap of doing is letting our reputation be the only thing that people associate us with. We have some talented footballers on our books and need to channel their passions into busting a gut to get back for challenges or getting into scoring positions.

Perhaps what’s also missing is a leader on the pitch. Kelvin Langmead’s absence is hitting us hard whilst Clarke Carlisle’s retirement robbed us of another reassuring and sensible head. Putting the captaincy onto Clive Platt at Bristol Rovers did little to convince me that we have another leader in our midst. When the armband just moves to being something for the most experienced man on the pitch to hold we have a problem. If, as stated before the transfer window shut on Monday, we have a defender waiting in the wings to sign on then it needs to happen sooner rather than later.

For now, let’s keep all eleven men on the pitch and go from there!