The Cobblers welcome high flying Exeter City to Sixfields tomorrow afternoon looking to build on what was eventually a decent point against Scunthorpe last week. The battle back from a goal down to earn a 1-1 draw wasn’t the greatest comeback in football history but what it did do was restore some stability to a stumbling start.

Had we lost that game it would have been five defeats from six league games but as it was we managed to pull at least something out of the bag and Aidy Boothroyd will be hoping that his side can make it three points in another big game at Sixfields on Saturday.

Former Cobblers loan player Paul Tisdale is seven years into his tenure with the Grecians (and is the second longest serving manager in England) with his spell at the club seeing him lead the club from the Conference to League One and then back to League Two again with last season’s tenth place finish coming after spending a lot of the season in the playoff places or higher.

They’ve made a good start to this season, though, and sit fourth after collecting three wins and two draws from their opening six games. Despite losing last season’s leading scorer Jamie Cureton they appear to be setting their stall out once again to trouble the main contenders for promotion. Having never won at Sixfields since it opened in 1994 they’ll be thinking that there’s no better time than now to do just that but the Cobblers have to start raking in more points to avoid being cast adrift already.

The Cobblers are waiting on the fitness of Lee Morris who could be available again after his recent injury but Lewis Hornby suffered a further setback this week when it was revealed that he has had a relapse of a back injury that’s kept him out of all of Town’s games so far this season. Pakistani international defender Kashif Siddiqi signed on a professional deal this week and could go into the squad whilst Jacob Blyth extended his loan deal until November 2nd. Kelvin Langmead and Alex Nicholls are still long term absentees.

Exeter striker John O’Flynn could return for the match after missing out on the last couple of weeks with a hamstring problem and that will be assessed before kick-off. Meanwhile, Jimmy Keohane and David Wheeler will battle for places in the starting line-up after doing well from the bench last weekend. 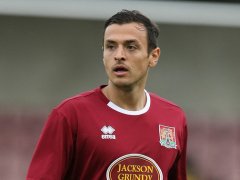 Nicholls…goal in this fixture last season.

The Cobblers’ away day woes towards the end of last season went on as Lee Nicholls fumbled a corner into his own net before Jamie Cureton and Jake Gosling sealed another dismal outing for Aidy Boothroyd’s men.

The first meeting between the sides in twelve years ended with a comfortable victory for the Cobblers. Bayo Akinfenwa volleyed us in front before Kelvin Langmead got on the end of an Emyr Huws cross to make it two before half-time. Alex Nicholls sealed the victory late in the day to extend Exeter’s poor history at Sixfields.

A big win for Town en route to promotion in 2000. Richard Green put us in front before Carlo Corazzin made it two before the break. Nerves were jangling as Darren Rowbotham halved the deficit mid-way through the second but Town held on for a precious three points.

Jason Rees had Exeter in front after just seven minutes from the spot but goals from Carlo Corazzin and Ian Hendon turned the game around as the Cobblers came home from Devon with all the points.

The Cobblers progressed to a Second Round tie against Basingstoke  and eventually a Third Round exit at Leicester City thanks to this replay win at Sixfields. Roy Hunter opened the scoring early on but it looked like Billy Clarke’s equaliser would send the tie to extra time until Carl Heggs netted the winner with four minutes to go.

A few days earlier, Darren Rowbotham had gave City the lead at St. James’ Park but Roy Hunter earned the replay in which the Cobblers would eventually progress.

The referee for Exeter’s visit is Robert Lewis. Lewis has shown ten yellow cards in three games so far this season and last took charge of a Cobblers game in the 3-1 win over Fleetwood Town back in January of this year. His last Exeter game was a 2-0 defeat against Port Vale last October.

Exeter are going well and have taken eleven points from a possible eighteen but nine of those points have been gathered at home. On the road they’ve drawn two and lost one and hopefully their shocking record at Sixfields (five Cobblers wins and one draw in six meetings since we moved from the County Ground) goes on tomorrow afternoon…I’ll go for a much needed Cobblers win by the odd goal. 2-1.