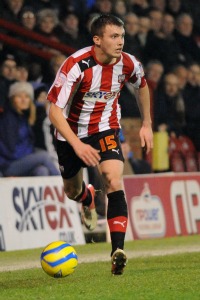 To those not aware of that crazy ol’ American soap opera ‘Dallas’, the ninth season ends with a sequence that reveals the ‘dead’ Bobby Ewing in a shower and with the realisation that the entire season was a dream. As Saturday afternoon unfolded I sat worried that another Dallas adventure was actually a figment of my imagination. You could forgive any Cobblers fan who may have felt the same as Town recorded that most rare of feats – an away win.

The obvious and tenuous Dallas link I’m (finally) getting to is that of the second Cobblers goal scorer on Saturday afternoon. I only learned of the loan signing of Stuart Dallas from Brentford a few minutes before kick-off so the fact that he came off the bench to seal the game would have had a lot of those not paying attention blink twice.

None of it is – as far as I know – a dream though and although we still sit in the bottom two it’s a massive boost to record a first away win of the season and to score two goals whilst keeping a second successive clean sheet. All in all it’s the type of Saturday that we’ve been longing for and it’s something to really build on this week. I’m actually glad there’s no Tuesday night game this week so that this can be enjoyed for as long as possible!

Dallas began on the bench after being thrust straight into the Town squad with Roy O’Donovan leading the line on his own and an extra defender slotted in to sure things up. The new look line-up started well and got their reward when a Darren Carter free-kick was well finished off by Lee Collins. It was his first goal for the club if you don’t count that dramatic own goal at Port Vale last season.

The Cobblers were having the better of things (it’s amazing what can happen with eleven men on the pitch!) and Ian Morris nearly added a second before we had one ruled out for offside. The home threat was minimal but there can’t have been a single Cobblers fan who was sitting or standing too comfortably given the shocking nature of our travelling form in 2013.

Coupled with that, the Wombles had won four out of four at home so far this season so obviously had something in their locker that wasn’t working. Bringing on former Cobblers left winger/left back Chris Arthur didn’t have me too worried, though the other side of my head said “he’s clearly going to tear us apart now.”

Town started as they had finished in the second half with Carter firing wide but were set back when Chris Hackett was taken off injured, replaced by the eventual hero Dallas.

The home side suddenly came more and more into it and could well have been level had it been for the right finishing touch at the end of promising moves. It was crucial for the Cobblers rear guard to hold firm – if Wimbledon were to score it may well have been backs to the walls.

Dallas would steal the spotlight, though, with around fifteen minutes to play as he was put in by O’Donovan and placed a shot beyond Ross Worner for 2-0. This away win was becoming more of a reality!

A couple of late flurries later including a good stop from Matt Duke from a dangerous free kick and we were over the line – a first away win of the season, a clean sheet and three precious points. Aidy Boothroyd joins us in a huge relieving breath.

There’s still plenty to do of course but if we are to get out of the mire at the foot of the table then this is exactly the type of performance that we need week in, week out. Oxford away up next is obviously hugely difficult but they’ve been beaten at the Kassam today so with new impetus and defensive resolution we are looking in better shape than a couple of weeks ago.