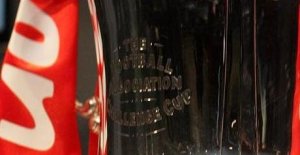 The Cobblers live on TV in front of the nation early on a Sunday afternoon away to a non-league outfit – it’s a perfect recipe for disaster and evokes shuddering memories of defeat to Canvey Island in 2001. Everyone tuning in that’s not a Cobblers fan will be baying for blood and almost expecting an upset as they finish off their Sunday lunches.

The game couldn’t be much more set up for a shock. Conference South Bishop’s Stortford have won all of their last seven games in all competitions while the Cobblers have been plummeting to the bottom of the Football League, plugging massive holes in the squad with short term loan deals and feeling confidence drain out of them bit by bit.

Stortford have beaten Hendon (5-0), Chipstead FC (6-1) and Conference Premier side Forest Green Rovers (1-0) to get to this point and will be confident of their biggest scalp so far against a shaky Town side.

What has happened this week with the re-signing of Jacob Blyth and the arrival of Ricky Ravenhill does shake things up enough to make you believe that Aidy Boothroyd is recognising his mistakes in the summer transfer window and his comments after last week’s latest injury time defeat makes you think that the dressing room is not a nice place to be right now. But Stortford won’t be worried a bit about that, nor should they be – this is their big day and we have to make sure that we’re not splashed all over the back pages come Monday morning!

Bishop’s Stortford could be giving Kyle Vassell his final game for the club with Peterborough United appearing to be close to signing the striker. Vassell has scored sixteen times this season and has also had scouts from the Premier League tracking his progress.  Tommy Fletcher is available after joining on loan from Wycombe Wanderers this week whilst Manny Sackey has re-signed in time for the game.

The Cobblers, meanwhile, will give a second debut to Jacob Blyth who starts his second loan spell of the season from Leicester and he should partner Luke Norris up front should he, and fellow Brentford loan man Stuart Dallas, receive clearance to play in the game from his parent club. Also featuring will be new temporary signing Ricky Ravenhill who joined from Bradford City this week. Ravenhill hit the deciding penalty for the Bantams in their FA Cup First Round Replay victory over the Cobblers a year ago. Kane Ferdinand has been given permission to play by Peterborough United and we could end up with five loan players on the pitch! Elsewhere, Matt Heath, Kelvin Langmead and Alex Nicholls are long term absentees whilst strikers Clive Platt and Roy O’Donovan aren’t ready to return just yet.

The last five seasons in the FA Cup…

2008/09: Bishop’s Stortford were eliminated in the Fourth qualifying round after a narrow 1-0 defeat at Dorchester Town whilst the Cobblers held Leeds United to a 1-1 draw at Elland Round in the First Round but were demolished 5-2 in the relay at Sixfields.

2009/10: Stortford were knocked out in the Second qualifying round a year later thanks to a 3-2 home reverse against Thurrock. The Cobblers beat Fleetwood Town in the First Round but Southampton claimed a 3-2 win at Sixfields to put us out in Round Two.

2010/11: Bishops’ Stortford again failed to get past the Second qualifying round – having been held by Bromley in the first game they lost out 2-1 in the replay. Meanwhile, Town eased past Forest Green Rovers before coming up short again in Round Two and again by a 3-2 score line, this time at Sheffield Wednesday.

2011/12: After coming past Canvey Island and Burnham, Stortford were one game away from the First Round but were beaten at home by Salisbury City and missed out at the last once again. The Cobblers lost 1-0 at Conference Premier side Luton Town and that was enough to cost manager Gary Johnson his job.

2012/13: In last season’s competition, the Blues beat Enfield Town 4-1 in the Second qualifying round and then came past Chalfont St. Peter in a replay before progressing into the First Round proper by winning 3-1 at Welling. Eventually, they lost 2-1 at home to Hastings United, who would end up going all the way to Round Three. We had no luck once again – having held Bradford to a draw at Sixfields, a youthful Cobblers side battled to a 3-3 draw after extra time at Valley Parade before missing out on penalties.

Stephen Martin will take charge of Sunday’s clash having been the official in games in all three Football League divisions and in the Capital One Cup this season. The last time that he was the referee in a Cobblers game was the 3-3 Sixfields draw with Southend United in August of last year.

I’ve been trained to expect the worst in this type of game, especially when we are struggling and the opposition are a high flying non-league outfit but I think we’ll scrape through. It won’t be easy so I think we’ll nick it by the odd goal. 2-1