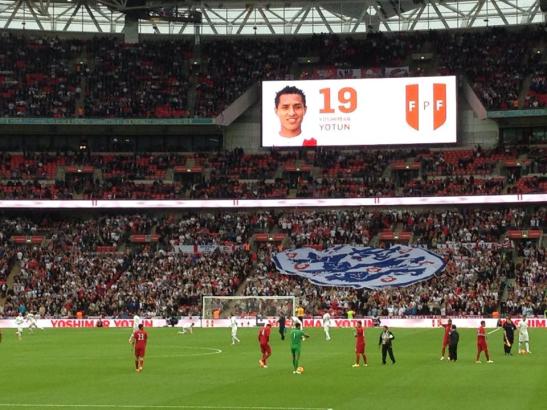 I had no real intention of getting a few World Cup blogs going to follow our nation’s progress (hopefully not lack of) over in Brazil. Then came Friday night and a family affair for me personally that was both a lot of fun and contained the sufficient ingredients to get me right back into being wrapped up in the international football scene again.

England are a funny old beast, particularly for us lower league football fans. Most of us (well those I know of anyway) would happily sacrifice an England World Cup win for just one season at the top table of the league pyramid or an FA Cup win. Such is the passion and local pride that goes into nine months of a season each and every year that it’s hard to get as lost in the fortunes of England every couple of years.

But as difficult as that is, once the summer competitions get going, once the flags start appearing in windows you can’t help but get thrown into the two weeks, hopefully more, of getting behind the group of players with ‘the world at their feet’ to coin a phrase from that much forgotten World Cup anthem by Embrace. This time around it’s happened earlier and while I’m not at fever pitch just yet the visit to Wembley on Friday evening last week for a rare treat of a live England match got the juices flowing. It was special for a different reason as well – my wife and her family are all Peruvian born with the majority of them still residing in Lima. Going along with Martha’s parents and brother plus nephew Jack presented me with plenty of playful ‘dagger eyes’ from the in laws whenever an England chance appeared!

It was the first visit to Wembley since that nightmare of a playoff final last May but luckily a spat of running late put pay to any tearful lingering and reminiscing on Wembley Way. We were seated behind the goal that the Cobblers’ faithful gathered behind a year ago and after getting into our seats it was a case of sitting back and enjoying football – something I rarely get the chance to do with the Cobblers.

The ball was actually sticking to feet, it was being played along the ground and in a passing style and it was clear that there’s a reason why these are the best our country has to offer. That being said, Peru hadn’t come to be pawns in an England training exercise. Indeed under new head coach Pablo Bengoechea they provided a stern resistance at the back with few chances early on and in fact could well have taken the lead when Jean Deza’ shot was deflected and woke up Joe Hart in the England goal with the man who had played for Shrewsbury Town against the Cobblers a few years back tipping the ball wide.

England’s patient build up was rewarded with a stunning Daniel Sturridge strike on the turn. I clearly wasn’t paying attention because I was taking tourist snap shots at the time… 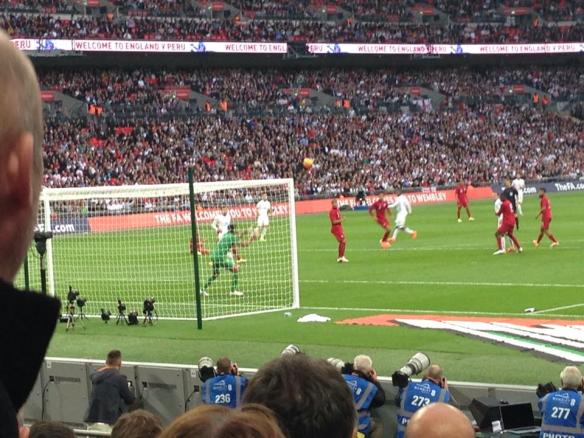 The visitors were eventually broken down but their small gathering of supporters stayed at hearty and as passionate as I’ve learned to be true of most natives of Peru. Applauding all three England goals and generally creating a fine atmosphere of their own they were a class act throughout (and I’m not just saying that to earn brownie points with the relatives!)

The second half England goals came from Leighton Baines corners and his deliveries could be key in tight games this summer – it was good to see both centre backs on the score sheet and it hopefully will give us a second dimension to games that could be decided by a set piece. Also impressing on the day for me was Adam Lallana, another who not so long ago was tearing the Cobblers apart in a League Cup game at St. Mary’s. He’s surely now wrapped up one of the berths behind what looks to be Sturridge as the furthest men forward. On the other side, Danny Welbeck wasn’t half as comfortable in the role and it’ll be interesting to see how Hodgson plays it for the two remaining friendlies before the big kick off and if a Ross Barkley or Raheem Sterling can force their way into his thinking.

Overall it was a good send off and a happy Wembley as the masses streamed back towards the clogged up tube stations. It was a strange but nice experience to watch some of the biggest names in the country take to the field and while it will never compare to a Kelvin Langmead beast tackle or an Ivan Toney piece of magic it did work to get me into this here World Cup.

I’m not sure how much I’ll blog on the competition but likely until we pack our bags to come home – it also depends on the amount of transfer activity taking place at the ever changing Sixfields. It’s all gone quiet since Marc Richards returned barring some more extended contracts but hopefully the summer excitement won’t be contained solely across the pond and down a bit.