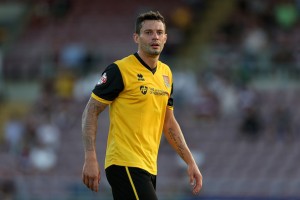 Dagenham and Redbridge must really hate the Cobblers coming to town. Over five visits, we’ve become that unwanted guest at their dinner party that just keeps turning up, eating all the food and leaving without uttering a word to anyone. It’s pretty rude of us.

After another win at Victoria Road, on this occasion a tame 2-0 in comparison to the jubilant scenes at the end of last season, the Cobblers are sitting pretty in the top seven of League Two and showing no signs at all of returning to the sort of trouble we were in back in April. This time out a brace was netted not by an up and coming youngster but by a wily experienced head with Marc Richards moving to four for the season with a double that takes him, quite ridiculously, to within one goal of matching last season’s leading scorers for the whole campaign Darren Carter and Luke Norris.

The damage, as in April’s win, was done mainly in the first half with Rico taking little time to add to last week’s winner against Exeter by finishing off a good move that involved Ivan Toney and Kaid Mohammed. It was a familiar sinking feeling for the home fans against the Cobblers and we were off and running once again.

Chris Hackett and Richards again tested the home goalkeeper Liam O’Brien before the second came when the Town striker rose highest after losing his marker from a Joel Byrom corner to nod home and to give Town complete control. He could have had a hat-trick, too, when his goal bound effort was stopped on the line by Brian Saah.

The second half was all about holding on to what we had but after Matt Duke was tested by a Luke Howell effort and the evergreen Jamie Cureton shot into the side netting things calmed down and the Cobblers shut up all avenues to their goal to clinch the points and yet another clean sheet at the home of the Daggers.

It’s an astounding sequence of results at Victoria Road – I can’t think of many places where we’ve had such a run in recent years and it’s hard to imagine it happening anywhere else for us for quite some time. Still, each game does have its own story and this one will be remembered for Marc Richards hopefully setting his stall out for the rest of this season and for a good clean sheet start for new boy Ryan Cresswell at the back.

Things are shaping up very nicely indeed as we head into a run of games that, on paper at least, could continue to throw us points to keep us within touching distance at least of the front runners. Dagenham and Redbridge will just be happy that their obligatory home defeat of the season is now out of the way before it does too much damage…