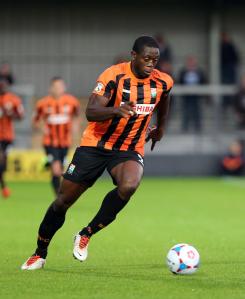 The stadium and surroundings may have been different but it was the same old trip to Barnet last night as the Cobblers fell to a first defeat of the season. For the second successive season that the Bees have been in the league, their first win came against us and though last time out it was in October this will have meant just as much to get off the mark.

There’s undoubtedly feelings of revenge in the air for them too after Town relegated them in 2013 on a final day of the season that helped to spare AFC Wimbledon in the process. But the main point is that Chris Wilder has more thinking to do if he’s to get back to the positive feelings around the club by the time a dangerous Plymouth side arrive at Sixfields on Saturday afternoon.

Wilder made a big gamble by changing his successful starting eleven with key attacking options amended by choice (Marc Richards and Nicky Adams replaced by Sam Hoskins and Dominic Calvert-Lewin) and by necessity (Ricky Holmes injured in the warm up). Zander Diamond, taken off at half time against Exeter, was also missing through injury as Rod McDonald came in.

It was a gamble that the manager would eventually pay for as chances went begging in the first half and the home side came out with more intent to take the win after the break.

Hoskins and Calvert Lewin forced Bees keeper Graham Stack into a double save early on before Lawson D’Ath missed a golden opportunity from a spillage from the Barnet number one. The lack of a clinical touch would come back to haunt us as, despite good amounts of possession and intent, Town faded in the second half.

Luke Gambin’s introduction for the hosts on the hour sparked them into life and it was his run that set up John Akinde soon after with the striker going down under Jason Taylor’s challenge for a penalty. Taylor was swiftly shown red and the complexion of the game was turned completely on its head. Akinde slotted home the penalty and from then on it was all in Barnet’s hands.

Rico was introduced from the bench but couldn’t muster up anything as the Cobblers struggled with ten men. Adam Smith pulled off a top drawer double save from Andy Yiadom but couldn’t prevent the crucial second goal late on. Town had pushed Ryan Cresswell up front to try and nick an equaliser when the Bees broke away and Akinde rounded things off with a straight forward second, rounding Smith and passing the ball into the net.

So the dream start is over as Town come crashing back down to earth in true Barnet away day fashion! Plenty to ponder ahead of the visit of a Plymouth Argyle side that have also won two out of three games and come to Sixfields on the back of a crushing 4-1 defeat of Carlisle United on Tuesday night. With their own group of fine attacking talent, that one should see plenty of goals.