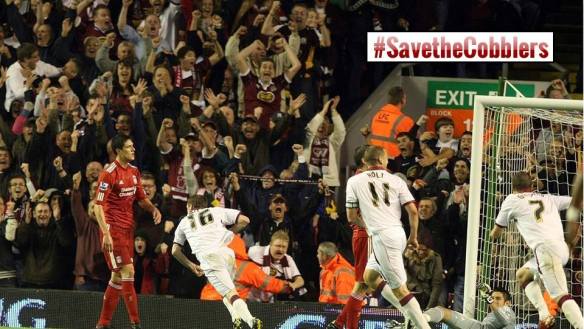 A couple of weeks on from my last post and Northampton Town edge that bit closer to D-Day and the winding up hearing on November 16. What we now know is becoming a little clearer, though once again conspicuous by his absence in any form (even his usual propaganda videos) is Mr Cardoza.

It’s emerged that Kelvin Thomas, formerly of Oxford United is leading a consortium and has agreed a deal to take over the club but the huge sticking point is the £10.25 million loan that needs to be sorted out with the council. With every passing day comes more meetings, more frantic clamouring for back up plans and the nerves at the heart of the club reaching breaking point. It’s looking more and more like it’s either this consortium, with a new deal with the council, or the end.

That’s how serious this is and the council, as Tony Clarke has said this week, simply must lodge an objection with the High Court and call for an adjournment at the very least on November 16.

In the meantime, the Trust is doing all it can to plan for all eventualities and have, as you would have heard by now, set up a fighting crowdfunding campaign here:

I ask for ANY football fan passing this blog, clicking on it by accident or finding it through whatever means to consider donating. The funds will be needed no matter what the outcome is and it’s been overwhelming already to see supporters from up and down the country leaving messages and money in support.

Any business can also get involved in sponsorship options here:

It’s not only been the fans chipping in with former players getting in on the act. Bayo Akinfenwa is auctioning his signed shirt from his first ever hat-trick here:

Mark Bunn, who came through the ranks here is setting up his own fund:

Added to that, fans are auctioning everything they can part with in order to help out and the show of strength by supporters everywhere is a sign of unity that should show anyone involved behind the scenes just what this football club means to us.

We’re not going away without a fight and wherever we are over the next few weeks, that claret fire inside of us all will be the one constant that can never be put out.

A final note to sign off with is to send condolences to the family and friends of Mr Brian Lomax who sadly passed away this week. Brian was one of the founders of the Northampton Town Supporters Trust, the first of its kind on its formation, and was one of the key figures in helping the club in its darkest of times. Above all of that, he was a Cobbler through and through and though I didn’t know him personally the tributes being sent out this week by those who did paint the picture of a gentleman, a pioneer and a friend.

Brian’s final battle cry was read out by his daughter Emily at the home game with Stevenage and he put it better than I can ever come close to doing.

3 thoughts on “Kelvin Thomas or bust?”