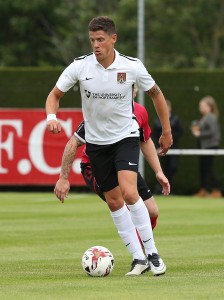 It’s been a pretty slow, concerning pre-season so far truth be told with the Cobblers squad being slowly chipped away at and poor old Rob Page trying to appease the situation with hopeful interviews and calming messages. So it was with a bit of relief that Page’s latest test, a friendly against QPR that in other pre-seasons wouldn’t have come under half as much scrutiny, was somewhat overcome thanks to a solid rear guard showing and a well taken goal from one of his new recruits.

It’s always a bit of a funny period in the build up to the big kick off but if we’re going to despair in the 4-2 defeat to Brackley then surely we should herald the merits of a draw with a decent Championship side. At the same time, if we don’t care too much that we shipped four goals on Saturday, we shouldn’t be getting overly excited by a strong defensive showing on Tuesday.

Either way you look at it, the QPR performance was an improvement and two new signings – at each end of the pitch – look decent acquisitions based on the feedback so far. Gabriel Zakuani has settled well at the back and Alex Revell continued a decent run in front of goal with an eye catching finish in front of the home crowd for the first time.

In the middle of the park, 17-year-old Shaun McWilliams provides a hope for a piece of home grown talent in the build up to the season. Having signed his first professional deal in May, McWilliams is now fully involved and by all accounts didn’t look out of place on Tuesday night. If his development kicks on it’ll be a massive bonus in a season when every place in the squad counts.

There are still questions on attacking intent with the obvious Ricky Holmes shaped hole just begging to be filled. Anyone looking for a direct replacement in terms of flair, creativity and style will likely be disappointed but if Page can pull a rabbit out of the hat in the form of a winger even close to Holmes’ ability then the first eleven will start to look more than capable of holding their own.

Port Vale’s player of the year Anthony Grant is the only target officially rotating around the Cobblers rumour mill as things stand with the midfielder the subject of an offer from his former boss that was described by Vale chairman Norman Smurthwaite as one that wouldn’t fuel his car for a year. Until we know what kind of motor Smurthwaite rolls around Burslem with we won’t know the true value of our offer but the point is that it was far beneath what Vale would require.

There’s surely plenty bubbling along under the surface but credit to Page for not rushing out and signing any old Tom, Dick or Harry just to appease the impatient among us (myself included!).

On the pitch, Tuesday night was a welcome relief and hopefully now that we’re well into the pre-season campaign some of the niggles will begin to iron out.

The final furlong – two weeks to go until the season starts – is upon us this weekend!