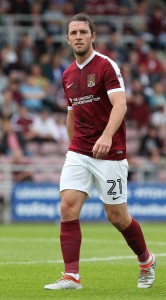 It’s a new dawn, it’s a new day. It’s a new year. Welcome to 2018 everyone! It had been a horrific couple of months barring one or two decent results and the Cobblers, Jimmy Floyd and Kelvin Thomas were up against it in a fight to stay in League One. But never fear, the transfer window was here to save the day!

In came Richard O’Donnell, a solid stopper at this level as well as the promising right back Shay Facey, the all-out attacking left wingback Jo Bunney, central defender Jordan Turnbull and, erm, Jack Bridge. Also coming in was Hildeberto Pereira, a flashy yet fiery character last seen on these shores at Nottingham Forest. Finishing off the recruitment was a man who even got his own promotional signing video from the club – it’s Jimmy’s fellow Dutchman Kevin Van Veen of course, here to save the day. Joking aside, Van Veen signing was seen as a real coup at the time and one that could propel us right out of the bottom four single handedly. Oh well…

Jimmy had a small clear out of his cupboard as well with strikers Marc Richards and Alex Revell on their way back to League Two with Swindon and Stevenage respectively while George Smith, who had made that outstanding start to Hasselbaink’s reign by setting up the first goal of the Hasselbaink era within twenty seconds, was sold to Chesterfield to make way for Bunney.

On the pitch, things seemed to be continuing in the same vein (Van Veen?) as Town were beaten by league powerhouses Wigan Athletic at Sixfields but the 1-0 defeat saw a small improvement in terms of performance that would be built on over the best month of our season.

Southend United came to Sixfields on a poor run and defied usual Cobblers logic by not actually ending a barren sequence and losing to Town. John-Joe O’Toole’s opener and a Jason Demetriou penalty had the game in the balance at half-time but second half strikes from Matt Grimes, also from the spot, and Alex Revell handed us a huge three points. Revell stormed towards the bench like a runaway train following his cameo and goal to scream “that’s why” at Jimmy and the bench. That’s why you don’t need to sign another striker presumably. He was right, in some ways.

Even more joyous occurrings followed at Bradford of all places – not usually the best hunting ground for the Cobblers. John-Joe headed home again and Chris Long set up an unexpected victory despite a late goal from the home side’s Paul Taylor.

We were on a roll! The playoffs were in sight! Well, maybe not, but this was fun. Two wins out of two was enough to send anyone potty so imagine the scenes when we actually made it three in succession by defeating the sinking MK Dons at Sixfields. Joe Bunney channeled his inner George Smith by storming down the left to assist the opener, from O’Toole again. MK threatened to ruin the party by equalising soon after but Chris Long got on the end of a Sam Hoskins cross to make it nine points from nine, pulling the plastic population down towards danger in the process.

JJOT was already being touted for League One Player of the Month even before yet another goal, this time at Ewood Park as Town nicked another excellent point. Danny Graham got the home side’s goal late on but it didn’t prevent January from being touted as a real turning point in the Cobblers’ season.

We had climbed out of the bottom four by the month’s end and were three points clear of MK Dons in 21st as the second half of the season kicked into gear.

@JoeAFC: Kevin Van Veen signing for Northampton..What a signing for @NTFC. Hasslebaink showing a clear statement of intent! Proven goalscorer in League One!

@NQNTFC A goal and assist for John-Joe O’Toole at Bradford. Such an important cog in the Northampton machine. Amazing how far he has come at the Cobblers. A cult figure and for good reason. #ntfc

Moment of the Month:

For the first time in a while there’s an actual choice for this! Three big wins and perhaps the most impressive was the victory at Bradford.

Player of the Month:

John-Joe O’Toole had a huge month and deservedly won the League One Player of the Month award as well as the club award.

Song for the Month:

Coming up: Steadying the ship ahead of the final furlong, Berto madness and one of the worst 45 minutes ever seen by a Cobblers team at Sixfields.