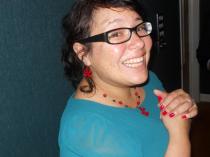 So after hearing about this blog and being married to the man who has ran it for many years I finally asked him … can I be a guest star in your blog.  You may ask what could I add to an already fully detailed and heart-warming blog (in a manly way of course),  Well I often make little comments to how the team is doing and my thoughts of football in general.  In one sense, it’s like hockey (which is the sport I play) but without that silly offside rule).

I do love the game, maybe more because I love my husband and everything he’s passionate about and I love Northampton again more because of my husband.  He told me that his granddad used to go to every match and this tradition has passed down through the generation.  I love how excited he gets about who’s being singed on and how the team is doing.  But more importantly I love that the Northampton team and supporters have such a true spirit for the game.  It’s not just watching some overpaid prancy boy running around with a new hairdo which after a half time needs gelling (sorry Ronaldo but seriously!)  But it’s about loving the team, the people and the town!.  I have heard many tales of different matches that have brought Danny to tears… and apparently other men were crying too… I can see why.  People care about this Northampton team and the players also care!

So that’s where I stand and as Danny informed me today (June 19th) was a big day as the “fixtures” have been announced, so him and his Dad were talking about which matches they could see… (Danny’s eyes did look at me at times as if asking for permission.  Sadly as we don’t live in Northampton Danny not going to all the matches has made it hard, and even harder now we have a 2 1/2 year old.  But still not impossible so I allow Danny to indulge in the illusion that he can go to as many matches as he likes… and come nearer the time we will negotiate if it happens.

I personally like to call this time… the time the men get their timetable, print it out look at it admire it and then hand it over to their wife. The wives then cross the ones off that can’t be done “that’s the weekend we’re going to my cousin’s daughters baptism” etc.

All fair in love and football!