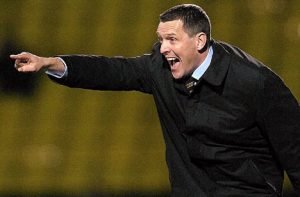 After months of agonising, weeks of hope, sleepless nights and nightmares of travelling to Forest Green Rovers on a Tuesday night, the job is done. It took us four attempts to pick up that last point but now it’s here we can celebrate an almighty achievement by Aidy Boothroyd and the players that he’s moulded into a squad that can compete in League Two. Back in November after that disastrous 7-2 home reverse against Shrewsbury and a 4-1 hammering at Plymouth that followed, few could have thought that we would be safe with two games to spare.

We snuck over the finish line at Hereford rather than storming over it but all that matters is that Clarke Carlisle was in the right place at the right time to clear one off the line and that Nicky Featherstone’s stoppage time screamer didn’t fly into the top corner but instead whacked the post and rolled across the goal mouth to safety. The full time whistle brought relief and reflections on a fantastic turn around by all involved.

There seemed little hope back in February when the Cobblers were three points adrift at the bottom despite form picking up slightly in early 2012. But signings like Blair Adams, Clarke Carlisle, Ben Harding, Toni Silva, Luke Guttridge and Brett Williams created a solid backbone of a side that could at least get stuck into opponents and go toe to toe with them – something we were ultimately failing to do under that last manager who shall not be named.

Harding in particular should be credited. Filling a role that often goes unnoticed can be tough but the midfielder’s absence was noticed in the last couple of games before this weekend. Carlisle has been a solid presence in the defence and Adams has given us an actual left back to cheer on. Guttridge’s quality in going forward gave us something different and Williams’ running has contributed to the cause, in particular the determination for the Oxford winner.

Of course there’s the rest of the squad that lived through the nightmare months as well to mention. Bayo has had a resurgence, Kelvin Langmead has often looked like a defender and even Ben Tozer has come back from the oblivion he found himself in. Michael Jacobs has continued to shine and John Johnson’s form never really dipped below a 7/10 rating.

The goalkeeping situation could have been a nightmare but after Shane Higgs and Chris Weale were both injured and Matt Duke recalled early by brawling Bradford, Neal Kitson stepped up in extraordinary fashion to save two penalties in his first two games and help the Cobblers to four crucial points.

The challenge ahead for Boothroyd now is to recapture this sense of togetherness over the summer. The loan players will return to parent clubs and of those I only expect us to be in with a chance to permanently go for Adams and possibly Carlisle so tying down Guttridge and Harding to permanent deals could prove vital to the continuity of the side.

What we know now that we didn’t know this time last year is that we can trust our manager going into the summer. There shouldn’t be any ‘marquee’ signings as such, with Boothroyd’s outlook appearing more to go for players who will get the job done. That job will also get tougher with the inevitable lifting of the expectations that comes with every single Cobblers summer. If we, as fans, can drop those a little to perhaps start looking as mid-table as a success then maybe we will be able to become more patient for once as well.

The bottom line is that we can look forward to two games coming up and we haven’t done that for a long time. Boothroyd said time and again that it would get worse before it got better but his underline statement was that he would take us to safety.

There’s still lingering thoughts niggling away at Cobblers fans up and down the land as we head into this weekend. We all know that despite Aidy Boothroyd continuously saying that we’re safe, we won’t breathe easily until it’s absolutely confirmed. We get a fourth chance to seal it this weekend against one of the sides trying to catch the chasing pack, Hereford United.

The Bulls missed an ideal chance to close some of the gap last week when they could only draw at Barnet but they’ll still be fired up for the run-in with still only a three point gap separating themselves from the Bees in 22nd.

For every nervy Town fan, please Cobblers, make it this weekend when those fears are extinguished!

Hereford come into the game rock bottom of League Two and are three points from safety after a 1-1 draw with fellow strugglers Barnet last Friday night. They’re without a win in seven games coming into this weekend, the last victory coming in a 1-0 away success at Morecambe on March 10th.

The Cobblers have now lost the last three games having gone down by a single goal at Swindon and then back to back 3-1 defeats against Bradford and home and Crawley away on Tuesday night.

Hereford boss Richard O’Kelly recalled Harry Pell from his loan spell at Cambridge United this week with the midfielder set to go straight back into action against the Cobblers. Pell scored two goals in six appearances for the U’s before he was called back to Edgar Street. Rob Purdie has been battling injury for some time but he could also be in contention while Doncaster loanee James Baxendale could make his first start after featuring as a late substitute last week.

The Cobblers will welcome back Ben Harding who missed out on Tuesday night’s defeat to Crawley Town and last weekend’s loss to Bradford. Toni Silva could also come back into contention after coming off the bench on Tuesday night.

Three members of the current Cobblers squad have featured on loan for Hereford in the past with Lewis Young (2010), Byron Webster (2010) and Nathaniel Wedderburn (2009) all having spent time with the Bulls.

A disappointing home defeat for the Cobblers earlier this season saw Nathan Elder and Steven Leslie put the Bulls 2-0 up at half-time. Saido Berahino pulled one back but Harry Pell sealed the victory and restored the two goal margin for the visitors twenty minutes from time.

Leon McKenzie’s first half hat-trick looked like seeing us home to three easy points but a stunning second half recovery from the visitors gave  them the most unlikely of victories. Stuart Fleetwood’s brace got the ball rolling before James McQuilkin levelled the game. Mathieu Manset scored the winner before Ben Tozer was sent off with three minutes to go.

Billy McKay and Bayo Akinfenwa were on target as the Cobblers earned a big victory at Edgar Street in February 2010.

Ryan Gilligan’ scored in the very first minute of the game but goals from Darren Jones, Mathieu Manset and Craig King turned it on its head as the Bulls secure a fine away win.

As the Cobblers battled against the drop in League One, Andy Holt gave us a crucial lead but Andy Williams levelled things for Hereford at the start of the second half. With twenty minutes to go, Jason Crowe scored the winner but it would be the final victory of the season as back to back defeats sealed eventual relegation.

The referee for the trip to Edgar Street is James Linnington who last took charge of the Cobblers back in January in the 1-0 reverse at Torquay United.

So it’s another chance to pick up those vital points that we’ve been waiting for in the last three games. Hereford will be up for it but I think we should be good enough to clinch at least a draw, which would be enough should Macclesfield fail to win at Bradford. 1-1