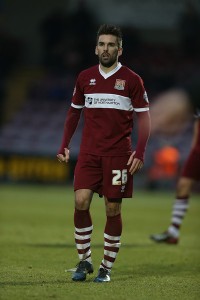 In the frantic early goings of the season, featuring a game every Saturday and Tuesday for the majority of August, it’s certainly a case of hitting the ground hard and the Cobblers have completed the first stage of the season with a steady return of three draws and yet another humbling of a higher division club in the League Cup.

Victory at Barnsley after extra time was an early indication that the squad has a bit of fight in them and it’s set up a decent Second Round home game with the Premier League’s West Bromwich Albion as a reward next Tuesday at Sixfields. The Baggies are one of those clubs who you’d think would relish a bit of a cup run but they’ve not been near a final since 1970 and only scraped through on penalties against Page’s old club Port Vale a year ago and did the same to League Two Oxford twelve months previous. Under the lights of Sixfields, Page will be well up for sprinkling more claret star dust on the competition.

Back in the league, a hugely creditable draw at Charlton Athletic on Saturday was followed by a scrappier goalless encounter at Boundary Park, Oldham, on Tuesday night. Charlton are likely to be among the front runners in League One and Ricky Holmes thankfully waited until Tuesday night and his new club’s victory over Shrewsbury Town to fully introduce his talents to the Addicks crowd. Holmes wasn’t at his best against the Cobblers and a point was a very good return despite taking the lead through Alex Revell’s first Town goal.

Tuesday night’s stalemate at OIdham is typical of the type of result we’re going to have to grind out this season if we’re to keep our heads above water. It sounded like a bit of a nothing game barring a golden chance for Kenji Gorre near the end but a third draw in a row is no disaster and it keeps the remarkable unbeaten run since the turn of the year alive and kicking.

AFC Wimbledon arrive at Sixfields on Saturday afternoon in what will be a new test for Page. It’s a game that Town fans will be targeting three points from, particularly as the League Two Playoff winners are yet to pick up a point this season. It certainly won’t be easy but it’s a big chance to get a massive three points on the board. Get them in the bag and I think we’ll officially be able to call it a Good Start To The Season.

Jason Taylor has departed Sixfields this week and joined Eastleigh – who also signed fellow former Town hard nut Ryan Cresswell earlier in the summer. The Spitfires then went and sacked the man who signed him, Chris Todd a day later! Best of luck to Taylor, who was one of the major players in the first revival under Chris Wilder.

Remember ex-Cobblers loanee Aleksander Prijovic? Until this week, the Serbian had been lost in the annuls of time in British football but he popped up again to thwart the plucky Dundalk on Wednesday night – in the Champions League no less! Prijovic, who played ten times on loan at Sixfields from Derby County in 2009, now plys his trade for Legia Warsaw in Poland and scored eight times last season including the winner in the Polish Cup Final. He netted the second of Warsaw’s goals in Ireland to make his side hot favourites to progress into the Champions League Group Stages. He could even come up against fellow ex Cobblers loanee and rejuvenated star Ron-Robert Zieler, who signed for Leicester City over the summer! Who needs Zlatan vs Buffon when you’ve got that showdown?!

The Cobblers are still short of – and being patient about bringing in – a striker and it looks as though the number one target won’t be in until next week now. Being so set on one or two targets at least means that we’re not leaping into the market willy nilly and signing anyone for the sake of it but hopefully it’s not too much longer before Rico and the tireless Alex Revell have a friend to train with and fight for over a starting berth.

That’s all for now – great to be back in the swing of the season!