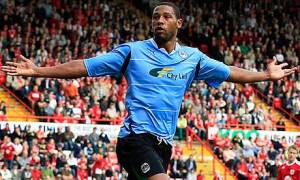 Platt…first signing of the summer

After a week in sunny Birmingham, intensely locked away with a Post Graduate Certificate residential, I’m back and thought I needed to catch up on some of the news from Sixfields this week, including the first new signing of the summer!

I have to first mention the Richard Butcher Memorial match that took place at Sixfields last week and after a shaky start in terms of people not knowing where or when to pick up tickets that in turn led to a delayed kick off it sounded like a really positive evening that featured most of the Wembley ’97 team, led by Ian Atkins, taking on a mixed bag of opposition led by Kevin Wilson. I hear Atkins even brought himself on for the final ten minutes. How he must have wished he could have done that back in those glory days! All in all, a 1,500 attendance and some good old fashioned nostalgia was a fine show for a fine man.

The biggest debate this week comes from Clive Platt’s signing and whether or not he’s a ‘Bayo replacement’ with the big man, and last season’s leading scorer, thought to be available to offers this summer. I’m not necessarily in the camp that says just because we’ve signed another big striker that the other one is on his way out. Platt has a decent record at the lower levels but has never been known solely for goals, something that Bayo has always provided. One thing that is clear from the interviews with Aidy last week is that Platt was high on, if not top of, the ‘priority signing’ list this summer. Having seen his signings in the last few months then I have no doubt at all that a 34-year-old signing a two year deal is a bad thing. Experience is massive in League Two and time will tell as to whether Bayo will be working with or competing with Platt. I’m still not convinced that Bayo is going.

Michael Jacobs, meanwhile, most certainly is. There appears no doubt in anyone’s mind that the midfielder will be at least a Championship player come August. Derby are the hot favourites to net the Cobblers’ Player of the Year and, with their new emphasis on recruiting young, raw talent from the lower leagues, seem an ideal fit. It’s surely only a matter of time and I personally wish him well. Get some clauses in there, though, Aidy!

So that’s about it unless I’ve missed anything else?! There’s some more Season In Review parts on the way this week and then all eyes will be on the summer rumour mill et al as the blog rolls on towards 2012/13!