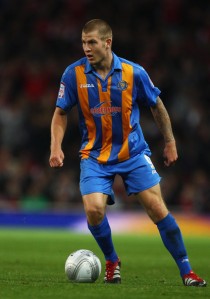 Six points, a grip held on second place and a genuine powerhouse of a signing at League Two level – it’s not been a bad Christmas and New Year period for the Cobblers as the home defeat by Portsmouth that derailed the fine run of form was quickly forgotten about with two very different victories.

It’s a stark contrast to twelve months ago when Town headed into the 2015 on the back of five straight defeats. We were two points from the drop zone having collected just 24 points from 23 games. Fast forward twelve months and 2016 begins with us five points clear of fourth place with a game in hand and with more than double the amount of points on the board.

The victories that keep us in touch with leaders Plymouth Argyle and the chasing pack were a good indicator of where we’re at. Fellow promotion hopefuls Accrington were the better side at Sixfields a couple of days after Christmas but an out of sorts performance still ended with us nicking the win thanks to the reliability of the blossoming pairing of Ricky Holmes and Marc Richards, Rico heading in the only goal of a tight games.

Barnet were more straight forward opposition for once and when you brush past the Bees, a perennial bogey team of ours, you start getting the feeling that we’re going to be in with a huge chance of keeping up the pace with a group of sides that are showing no signs of blinking in this huge promotion race.

The fact that the ranks were boosted on Tuesday by a beast of a signing – Shrewsbury striker James Collins on loan until the end of the season – surely makes everyone else sit up and take notice. It’s s statement of intent that means that the attacking options are even more potent than ever. The exit of Dominic Calvert-Lewin would have been disappointing after the youngster made a good impression in his short time here but given that the focus is now on promotion the moves in and out make a lot of sense. Calvert-Lewin certainly has potential but it’s understandable that if someone like Collins becomes available you have to go for him.

Collins’ first involvement will be a top of the table clash at leaders Plymouth on Tuesday night but first comes a rare appearance in the FA Cup Third Round on Saturday. It’s been one of the most dramatic cup runs in recent times with the victory at Coventry drawing all the emotion possible from a travelling contingent that were genuinely believing that it could be the final ever away game for the club and then a remarkable turnaround against Northwich Victoria threw us into the hat.

It’s not the glamour tie it could have been at this stage but the appetite and desire of a squad chomping at every bit of opportunity that comes their way means that there’s a big opportunity for an upset and progression to a stage not reached since 2004.

It’s still ‘pinch me’ territory from where we were before that game at Coventry and whatever happens on Saturday and then on Tuesday, you have to be thankful for this completely opposite style of ‘worry’ we’re facing in the next few days.

As we settle in for this double header, let’s first check out the latest man to tie his flag to the mast of the good ship Cobbler…