So you know that proven goal scorer we’ve been waiting for? Well, he’s arrived (on paper anyway…and only till January but who are we to argue?!) as Izale McLeod signed this afternoon   on a deal until January from MK Dons. The big striker has been a bit part player in his second stint at Stadium Plastic so he’s popped down the road to give Aidy Boothroyd a real bolstering of options.

The former Derby, Sheffield United, Charlton, Colchester, Millwall, Peterborough, Barnet and Portsmouth man joins at a time when we’re crying out for a man who can take this league by the scruff of its neck and drag us out of the relegation zone. Jacob Blyth’s contract will run out soon but with Luke Norris bagging plenty of goals so far there’s competition from three loan strikers now.

I would start McLeod on Saturday against Accrington Stanley. It’s the absolute biggest game of the season and we have to go out firing. A new striker hungry to rekindle the type of form that saw him bag thirty two goals for a mostly struggling Barnet side in this division between 2010 and 2012 is just the antidote to what should be a nervous Sixfields.

Two other bit of loan news today (did anyone else realise it was ‘loan deadline day’?) with Kane Ferdinand recalled by Peterborough United. The Posh have an injury to Tommy Rowe and have lost FIVE in a row (couldn’t resist!) in League One so Ferdinand has been drafted back to London Road.

Strangest deal of the year award, though, goes to Ben Tozer’s temporary move as he departs from the Cobblers whilst being in and out of the team and joins League One Colchester United. When I saw him play against Fleetwood Town a couple of weeks ago I thought he had the best game he’d had in months and genuinely had a rethink about his abilities at right back. Now, though, he’s farmed on loan up a division – quite a rare occurrence in lower league football. Unless there’s a permanent deal at the end of it in January and/or Boothroyd has added a stipulation that Col U pay Tozer’s wages in order to pay for McLeod then I see this as very odd.

In more serious news, Kelvin Langmead has suffered a setback in his recovery and may not be back until March according to reports. This is very bad news for our defence which has been noticeably shaky for most of this season without Langer’s influence. Not to mention the lack of late goals he contributed at the other end!

So where are we at now?

Despite the McLeod signing, it strikes me as strange that on the day we lose our captain (a defender) for longer and suffer a midfield setback that we go and sign another forward so hopefully it doesn’t backfire. This could also mean another chance for those early season flops Gary Deegan and Darren Carter, both of whom have points to prove. It’ll be interesting to see who partners Ricky Ravenhill in the middle of the park on Saturday.

So a busy day and an important one…now all we need is for this proven goal scorer to buck the trend of past prolific signings and actually score goals here rather than forget to bring his scoring boots to Sixfields!

“My own definition of leadership is this: The capacity and the will to rally men and women to a common purpose and the character which inspires confidence.” (General Montgomery)

It’s getting ever more apparent that the Cobblers are severely lacking in the leadership department since Kelvin Langmead’s injury ruled him out of the start of this shaky season. The captain, who pulled us out some gigantic results last season and was a presence like no other on the pitch was sorely missed at Wembley in the big game environment and his absence so far has left a gaping hole in the back four.

Not only has there been sloppy goals, confused starting formations and poor marking (leaving poor old Matt Duke, the player of the season so far, stranded) but a general lack of cohesion in the middle of the park isn’t helping. Technically, and on paper, we should have enough to compete at a decent level with the players we have but the problem is that, despite the obvious experience of some, no-one is picking up the mantle of leader.

It’s all very well Ian Morris being voted in as stand in captain at the start of the season when it was realised that Langers was set to miss three months but surely there lies a problem in itself that no-one grabbed the armband and put it on themselves.

In any successful team there’s not just one man to rely on in terms of a captain. When you look back on past glories you could have identified at least three or four candidates for the Cobblers skipper should the original pick be out of action. Take my usual example of best practice, the 1997 playoff squad. Ray Warburton was the man to lift the trophy as captain but had he been taken off injured then the arm band would have seamlessly moved on to the likes of Ian Sampson, Ian Clarkson, John Frain, David Rennie, Sean Parrish, Roy Hunter, Neil Grayson, John Gayle or even goalkeeper Andy Woodman. The only player starting who I wouldn’t have given it to was Christian Lee and that’s only because he was a young gun. Even substitute Dean Peer would have done a job.

If we move on to the promotion season of 2000, Sammo is captain himself but again you see endless leaders in waiting with the likes of Frain, Parrish, James Hunt, Dave Savage and Ian Hendon all decent replacements to lead the side. In 2006, Lee Harper, Luke Chambers, Hunt, Chris Doig, Martin Smith, Ian Taylor and Scott McGleish could all have laid claims to the position.

At the moment it feels like we just need people to come out of their shells and fight for the captaincy. It concerns me that there wasn’t a clamour for the arm band and the characteristics of leaders aren’t coming out on the pitch. We have plenty of players who have been around a long time but that’s not necessarily an attribute that leads itself to being a captain or someone who’s going to set the example and raise the standard for everyone else.

It also comes back to the manager himself with Aidy Boothroyd needing to transfer his own passion and determination into the players when they walk over that white line on a Saturday afternoon. He can do nothing to make the quality better in the players he has but what he can do is form a team that is mentally strong and who battle for one another.

That’s what we need right now…it’s not flashy moments of quality, it’s players willing to put themselves on the line and show the dwindling crowds that even if they are to lose a game they’re going down fighting. That often speaks louder than someone beating three players in one move and then drifting for the rest of the game.

We need our fight back and we need it on Saturday when Morecambe lie in wait for a Cobblers side who have to send out a message to concerned fans that we’re ready to hit back and get out of this position. For the supporters, we have to do the same. Don’t sit back and wait for something to moan about…stand up, be counted and show the players that you’re willing to do exactly the same as you want them to do.

Lead from the stands and that can inspire this team to better themselves. We’re only just getting going with this season so let’s not dismiss it just yet. 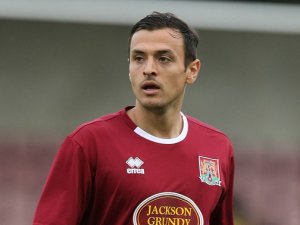 The fear of the 3-2 result returned on Saturday afternoon as Burton Albion briefly threatened a fourth successive season of that particular score line haunting our fixture lists. Fortunately, or brilliantly based on the late equaliser from Alex Nicholls, this was to be a change of direction as the Cobblers earned a point and after coming back from 2-0 and 3-2 down we can count ourselves reasonably happy with the weekend activities.

The fact that we got to the point where we were two down, though, will grate with Aidy Boothroyd. This really was a game of two halves with the threat of Town falling to another hefty half time deficit against the Brewers very high after Calvin Zola’s opener that put us on the rack. Luckily for us, though, Zola was taken off soon after and the second half would be more of a battle.

Albion went two up on fifty five minutes and it did seem like game over with Billy Kee’s cross going in off Kelvin Langmead for 2-0. But almost immediately after the introduction of new loan signing Kemar Roofe, replacing Chris Hackett, things started to turn in the Cobblers’ favour with the West Brom man lifting the tempo.

Langmead headed in at the right end and it was game on. Suddenly the Cobblers were a different side and peppered the hosts’ box with waves of attack. The reward came when David Artell volleyed in a cross from the left. At that point it wouldn’t have seemed against us to go on and win the game but that 3-2 score line was to hover over us until a frantic finale.

That was thanks to Zander Diamond heading in with ten minutes to go to sink what looked like a powerful force coming from Aidy Boothroyd’s men. But there was one last twist in the tale. Alex Nicholls raced onto a through ball, brought it down well and sent a stunning chip over the home goalkeeper Stuart Tomlinson to earn a well fought out draw. It was a genuine goal of the season candidate and a strike that will hopefully reinvigorate the early pace setter in the Cobblers’ leading scorer charts.

That sort of point is another of the type that we wouldn’t have picked up in the first half of last season and as long as we continue to rack results up I’ll be happy. It’s a toughie tomorrow evening at home to league leaders Gillingham but after they lost for the first time in the league on Saturday they’ll hopefully be wounded enough for us to continue a fine start to the home campaign.

This result knocks us down into the bottom half of the table but a decent result against the Gills would push us back up again with the league still in the process of taking shape. It should be another decent atmosphere under the Sixfields lights…a preview of that one to follow on Tuesday morning here!

For now, we catch our breaths after a dramatic Saturday afternoon at the Pirelli Stadium.