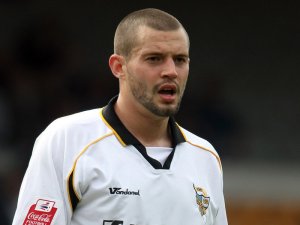 My enduring memory of Marc Richards doesn’t come from where you might think. When most people think of Rico they recall the astounding four goal salvo at Macclesfield – he could even have left Moss Rose with five that day had it not been for an incorrect disallowed goal – in a game that saw him finally dust off the bad luck that had plagued his first season with the Cobblers. Instead, when I think of the man who made a return to Sixfields yesterday my fondest reminiscence is actually a game that took place two weeks later.

The KC stadium, Hull City (yes, that same Hull City who line up in Saturday’s FA Cup Final!) was the venue and the Cobblers were coming back from a poor start to the season under Martin Wilkinson to lie on the brink of the playoffs under the new regime of Colin Calderwood and John Deehan. In fact, after this game we actually harboured hopes of a late run to the top three but though that didn’t quite materialise we did secure a playoff spot and that epic dual with Mansfield Town.

To stand any chance of keeping up the pace we needed to get something from the KC from a Hull side flying high in Division Three (League Two). Any sort of result would have been a huge achievement at a side back on the rise in their shiny new stadium but what we got that day was one of my favourite ever away days. A huge army of Cobblers fans had travelled, buoyed by Rico’s heroic hall at Macclesfield and a 2-1 win at home to Oxford the following week.

Richards took just two minutes to send us into delirium with an unstoppable strike from all of thirty yards that arrowed into the top corner of Boaz Myhill’s net.  It wasn’t just that goal that stands out from that performance – the team showed tremendous guts and togetherness to come back again once Hull had equalised. Eric Sabin struck twice to give us a 3-1 half time lead and though City hit back again for 3-2 in the second half the Cobblers held on for a huge win. Richards led the line with style that day and was a perfect foil for Eric Sabin for the remainder of the season.

His second season didn’t work out well with injuries plaguing any chance of cementing a legacy with the club but after yesterday’s announcement that Rico is coming back after signing on a free transfer he’s got a second chance to shine at Sixfields. His stints at Barnsley, Port Vale and Chesterfield have all produced goals and he should provide some of the younger strikers valuable help in their development whilst still hopefully banging them in on the pitch.

After waiting twenty seven games for his first goal in his last spell here, though, let’s hope Rico gets going a bit quicker this time! 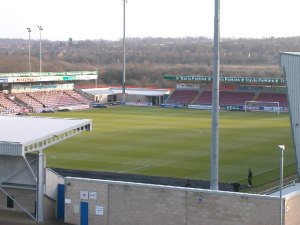 It’s feels like an age since the Cobblers last participated in a Saturday match and after a couple of good Tuesday night victories you could forgive Town fans for wanting to keep on replacing weekends for nights for the rest of the season. But we’re back in action tomorrow with a third home game in a row with Port Vale the visitors.

Vale are once again on the brink of the playoffs having recovered from a poor start to 2012 to record four games without defeat (three of those producing wins) including a last gasp Mar Richards penalty handing them all three points last Saturday at home to Gillingham. That left Micky Adams’ side within two points of the playoffs as they head towards the final furlong of the season.

The Cobblers have taken six points from their only two games this month, both of which have come at home and in the course of doing so have tripled their home wins count for the season!

As mentioned, Vale are unbeaten in four having disposed of Rotherham, Plymouth and Gillingham either side of an away point at Bradford City.

There are no new injury worries for the Cobblers going into the game with Nana and Shane Higgs the only long term absentees who won’t play again this season. But there were no knocks from Tuesday’s win over Macclesfield so expect a pretty similar starting eleven from Aidy Boothroyd’s men.

Chris Birchall, Port Vale’s most capped player, returned to the club last week and could be in line for a start at Sixfields after receiving international clearance on his month-to-month deal back with the club he began his career with. Birchall left LA Galaxy in December and has been training with Mickey Adam’s side. He played in a reserve team game on Wednesday and is set to play some part tomorrow afternoon.

Marc Richards made over fifty appearances for the Cobblers between 2003 and 2005 with the striker netting ten times during his spell at Sixfields. He struggled to get going at first but a superb spell towards the end of the 2003/04 season saw his goals help us into the League Two playoffs. That run included all four goals in the 4-0 win at Macclesfield Town and a screamer at Hull in memorable 3-2 victory. After leaving the club in the summer of 2005, Richards spent time at Barnsley before joining Vale in June 2007.

A horror show of a first half sees the Cobblers three goals down inside twenty five minutes thanks to goals from Tom Pope, Anthony Griffith and John McCombe and we have no answer in the second half.

Abdul Osman was sent off for the second time in the season against Vale but the Cobblers held out for a point earned a few minutes prior to the red card thanks to an equaliser from Leon McKenzie. Justin Richards’ penalty had given Vale the lead but McKenzie swooped three minutes later to earn a point.

Stale mate at Sixfields as Abdul Osman is sent off just after half-time.

In the final away game of the 2008/09 season, Ryan Gilligan and Andy Holt put the Cobblers in control but Richards halved the deficit before Danny Glover made it 2-2 in the second half.

Taking charge on Saturday at Sixfields is Gavin Ward, a man who last refereed a Cobblers game in a 3-0 home defeat to Aldershot back in February 2010 on a night where he showed an early red card to Kevin Thornton from which we never recovered. Ward has been involved in a few thrillers this season including MK Dons 6-2 Chesterfield, Barnet 3-6 Burton and Brentford 3-3 MK Dons.

It’s a much more difficult game on paper than the previous two victories and the Cobblers will have to step it up in order to escape the bottom two this weekend. With Plymouth hosting Dagenham and Hereford going to Bradford it’s a huge weekend at the bottom but a point would be seen as a decent return from this one so I’ll go for 2-2.