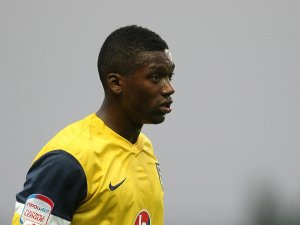 It had to end somewhere and unfortunately for the Cobblers, for this little spell anyway, the glory of a winning run came to an end at the Kassam Stadium, Oxford. The three sided arena was the setting for one of our most glorious triumphs in recent years back in the 2006 promotion run-in but as we began to hurtle towards an extraordinary leap to similar dreams we were cut off by a dodgy refereeing decision and a failure to hold on to a point.

Town thought they had earned what would have been a good draw late on when Clive Platt headed in a cross from former Oxford trainee Chris Hackett. That came at the end of a good spell of pressure from the Cobblers and you would forgive us for thinking that we could turn one point into three but it just wasn’t to be and we were caught out pretty much straight from the kick off.

The day just seemed destined to be Oxford’s. A terrible call in the opening fifteen minutes saw James Constable slot in the opener despite looking a long, long way offside and that set the tone. Platt’s equaliser came after some hard graft but just as quickly as we had got back into the game we were behind once more.

A long, high ball over the top was brought down by John-Paul Pittman who finished well and sealed a vital three points for his side. To make things worse, Clarke Carlisle was sent off for his second booking of the game in the final minute. Some news stories had it down as foul and abusive language, leading many to mock the chairman of the PFA before they knew anything about the simple facts of two bad challenges.  Carlisle will now be out of the team again just as quickly as he returned to it.

The defeat didn’t feel like a disaster afterwards. Going into a break thanks to our lack of FA Cup action next weekend, there’s time to regroup and having won the previous three matches we are in a rare position of taking a defeat on the chin and being able to move on pretty quickly as December arrives with plenty of challenges, none less than the JPT Area Quarter Final at home to Leyton Orient in just over a week’s time and the following home league game against Cheltenham Town.

The league table still has us in good shape with some decent results happening in terms of our positioning so the Cobblers are still hanging on in there ahead of a busy Christmas period. We go into it with high hopes of catching those occupying the top seven and with relief that there’s sufficient points in the bag that, barring a complete disaster, would see us enjoying a comfortable Christmas of league table watching.

With such a growing momentum and on the back of three straight wins in League Two as well as a free scoring style coming to the fore, it’s a perfect time for local derby with a big turnout expected for our closest League Two rival geographically this season. The Cobblers sit just a point outside the playoff positions and three points from the top three so there’s a massive incentive for a group of players who are improving as a cohesive unit by the week.

Oxford, though, possess the thing that all Cobblers fans fear in a winless run. Already this season we’ve seen Bristol Rovers and Barnet end such runs against us and although we are in a much stronger position than before either of those fixtures it still means that there’s a cautious confidence about the weekend. It should be a cracker of an atmosphere with both sides needing the win for different reasons.

U’s on the hunt for return to form…

Since defeating Wycombe and Barnet in the league and cup respectively, Oxford have been on a run of four games without a win. Defeat at home to Dagenham and Redbridge was followed by a goalless draw with Torquay and a 2-1 loss at Chesterfield. Last weekend saw them come from behind to lead at Barnet – a quick repeat of the cup outing – until Jake Hyde scored his second of the game for the Bees to earn his side a point.

Chris Wilder was dealt a major blow last week when he lost both Deane Smalley and Tom Craddock to month long injuries. Craddock is missing with a cracked rib while Smalley has had an operation on an abductor muscle, meaning that both will miss this game and the next two or three following it. Craddock is the club’s top scorer this season with ten, including four in the 5-0 win over Accrington Stanley a month ago. 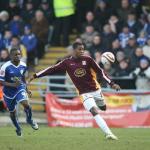 Oxford manager Chris Wilder was with the Cobblers as a player but only played once during a short spell on loan from Sheffield United in 1998.

Liam Davis had a longer stint with Town, playing over seventy games for the club over a three year period between 2008 and 2011 and scoring eight times.

Oxford-born Cobblers winger Chris Hackett began his career with the U’s and played over a hundred games for the club before heading north for Hearts in 2006.

Oxford will be without the aforementioned striking duo of Smalley and Craddock while Liam Davis will face a late fitness test. Michael Duberry and Damien Batt are getting closer to a return but neither are expected back for this one. Meanwhile, defender Johnny Mullins has been recalled by Rotherham United from his loan spell at the Kassam Stadium.

The Cobblers added right back Chris Smith to the squad ahead of the weekend as he joins from Swindon Town. Smith won a 2011 ‘Win a Pro Contract’ competition to earn his place at Swindon but has found it tough to break into their first team this season. He goes straight into the squad for the Oxford game. Elsewhere, Clarke Carlisle should start again after helping the side to a clean sheet against Morecambe on Tuesday night but Joe Widdowson picked up his fifth booking of the season during that game so misses out on this one with a one match ban. There’s no new injury concerns for Aidy Boothroyd with David Artell, John Johnson and Luke Guttridge out until January.

A cracking Good Friday match under the Sixfields lights saw Luke Guttridge score inside the first minute to give the Cobblers the lead. Christian Montano equalised before Neal Kitson saved his second penalty in as many games to keep us in it. Right at the death, Brett Williams chased down what looked like a lost cause, cut inside and curled in one of the most important goals of the season to earn a simply massive three points on the way to Football League safety.

This was my wedding day so I barely knew we were playing this match until my best man reminded me with a sneaky score update during dinner. Those that were concentrating saw Town comfortably beaten thanks to goals from Tom Craddock and Deane Smalley.

Andy Holt gave the Cobblers the lead at Sixfields going into half-time but Tom Craddock pulled things level two minutes after the break. Leon McKenzie sealed a big win, though, by putting in the winner with a quarter of the game to go.

Alfie Potter scored early on in this one but Leon McKenzie equalised on fifteen minutes. Josh Payne would give the U’s the lead back right on the stroke of half-time and when John Johnson was sent off for a foul in the area on ninety minutes, Tom Craddock stepped up to seal the victory for the hosts.

One of the best away days in recent memory. The Cobblers were looking for three points to continue a surge towards automatic promotion while Oxford were clinging on for dear life at the wrong end of the table. It made for a red hot atmosphere at the Kassam but one in which Town flourished. Chris Doig finished well from a corner to slam Town in front before a quick fire double from Martin Smith and Josh Low in the second half sent a 4,000+ army of travelling fans wild. Chris Willmott got one back for United but the Cobblers held out for a memorable win. A couple of weeks later, the clubs were leaving League Two in opposite directions.

A close contest was won by the Cobblers as Ian Taylor scored his 100th career goal at Sixfields to cap only a second home win of the season for the club. Scott McGleish flicked on a long throw from David Hunt into the path of Taylor who nodded in what turned out to be the winning goal.

Taking charge of the clash at the Kassam is Scott Mathieson. Mathieson has shown 41 yellow cards and 4 reds in 16 games so far this season and last refereed a the Cobblers back in 2009 when we came away from Morecambe with a 4-2 victory.

I really don’t want this joyous feeling of wins to stop so I’m not going to jinx it with a bold prediction of a big win. So I’ll keep quiet and predict a safe draw that I would happily take after the recent good results. 2-2

The Cobblers are one of the four sides in today’s League Two Season Previews and are joined by Gillingham, Morecambe and Oxford United as we head into the second half of the series ahead of the big kick off!

Here are the links for today:

For links to all of the previews so far, click here!