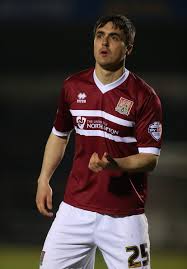 It’s July 2nd are the Cobblers have apparently already finished their transfer business after completing the signings of Evan Horwood (two year deal) and Danny Alfei (season long loan) this morning. With over a month to go until the start of the season Chris Wilder is now happy enough with his squad that, barring another striker becoming available, he’s ready to roll. It seems unprecedented that we have all of our targets and signings in place before the rush of the last minute in August but it can only help with the togetherness of the squad to have a few weeks of bonding knowing that the group won’t be changing all that much before the big kick off.

We all know about Horwood, of course, after his performances in the eight games he played in at the end of last season enough to persuade Wilder to give him a longer deal this summer. His attacking play as well as his ability to defend was key in our survival and it’s also hard to find a better deliverer of the ball into the box in the sqiad than the former Tranmere man. It’s been the worst kept secret for the last few weeks but that doesn’t make it any less of a positive signing.

Alfei is another attacking full back, this time on the right hand side, who debuted for Swansea in January 2011 but who has spent most of his time on loan with spells at Wrexham and, more recently, Portsmouth, in the last couple of years. He signed a new contract with the Swans in 2013 and that should say enough about expectations for the twenty two year old.

The double signing says a lot about Wilder’s plans for the formation and it looks set to be a vibrant and attacking side that takes to the field to kick off the season at home to Mansfield Town on August 9th. Added to John-Joe O’Toole, Marc Richards and Zander Diamond these two make it an excellent summer of recruitment. There’s still an outside chance of a big forward coming in but with O’Toole’s addition this week there’s less urgency around that one as initially felt.

Pre-season is in full swing and we’ve entered July – the countdown has officially begun!